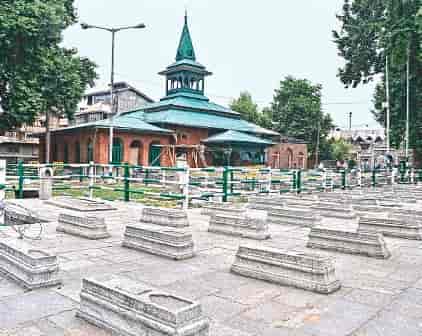 Political parties in Jammu and Kashmir (J-K) paid rich tributes to the martyrs of 13 July 1931. The National Conference called it a day of “emblematic importance” for the people of J-K as it marks the launch of wide spread people’s agitation for the restoration of their due human rights.

NC President, Member of Parliament from Srinagar, Dr. Farooq Abdullah and Vice President Omar Abdullah on Sunday paid tribute to the martyrs. “The brave men who laid their lives on the 13th of July 1931 belonged to a generation of wisdom, and vision. It was them who saw in darkness and despair a vision for the forthcoming generations, they envisioned a society free from bondage, discrimination and oppression,” said Dr. Abdullah. “The idea behind remembering them is not merely an act of reminiscing past, memorializing, there is more to it, on this day we galvanize our lives with their mission as was done by sher-e-Kashmir all through his life.”

It was on that day that a martyr, the NC statement read, who was breathing his last had told Sher-e-Kashmir that he had done his duty and that it was his duty now to proceed ahead.

“Sher-e-Kashmir and Madr-e-Meharbaan along with other stalwarts of Kashmir’s freedom struggle, taking inspiration from the Matyrs of 1931 carried forward their mission of uprooting the yolk of feudalism from J-K,” Dr. Abdullah said.

The functionaries said that the National Conference will continue to struggle towards realization of dreams of the martyrs.

The People’s Democratic Party (PDP) also remembered martyrs, stating that their role in Jammu and Kashmir’s freedom struggle can neither be undone nor can be forgotten.

The PDP spokesman has said in a statement that the memory of 13th July martyrs cannot be erased by changing the government calendar of holidays as they will live forever in the hearts and memories of every freedom loving Democrat.

He further said that the martyrs laid down their lives for the empowerment of the people of J-K and that “it is tragic that the myopic and communal actions of the present government demolished with one stroke on August 5, all the progress that had been achieved in the last seven decades.”

He said that PDP reiterates its commitment to the objectives of justice, empowerment and democratic rights that the martyrs have laid their lives down for.

“The people will however continue their struggle to resist demographic change, disempowerment, and oppression through democratic, constitutional and non violent means to rebuild the state in accordance with our traditions of tolerance, accommodation and amity,” said the PDP spokesman. “We reject the undemocratic status quo imposed on us by the BJP government, which has deprived us of our autonomy, freedom and human dignity, which underpin the constitution. We demand an immediate end to Centre’s denial of the political issue.”

People’s Conference senior vice president and former minister Abdul Gani Vakil said that their valiant sacrifices would continue to inspire people of the state to fight for their rights, dignity and justice.

“The movement against the monarchy was started and led by the people of Kashmir, who immortalised their courageous fight by rendering the ultimate sacrifice of their lives,” he said. “Their valiant struggle in 1931 was for change, a struggle against monarchy, oppression and feudal repression. Their struggle was for making a Kashmiri master of his own destiny.”

Like his contemporaries, Mr. Vakil further stated that the sense of servility that a Kashmiri has been subjected to today is no different than what the rulers in 1931 did.

“Our struggle today is the same. The present day rulers have left the monarchy well behind in their unquenchable thirst to disempower and humiliate Kashmiris. We must be inspired from the spirit that was nurtured and sown by the martyrs in 1931 and resolve to rise above self to carry forward their sacred mission of fighting for the rights, interests and dignity of disempowered Kashmiris”, he added.

Awami Action Committee (AAC) also claimed that till today, people of J-K have rendered numerous sacrifices of life and limb incarcerations and arrests to fulfill the great mission of the martyrs and continue to do so.

“Not only does the non resolution of the issue pose continuous threat to peace in the region and an atmosphere of uncertainty, but the clouds of war keep hovering over the whole [South Asian] region due to this unresolved dispute,” the party said in a statement.

This year due to COVID-19 pandemic and the house arrest of the organisations head Mirwaiz Umar Farooq nearing a year now, the congregational tributes and march to Martyrs’ Graveyard to pay tributes to 13 July 1931 martyrs is cancelled. (With inputs from KNS)