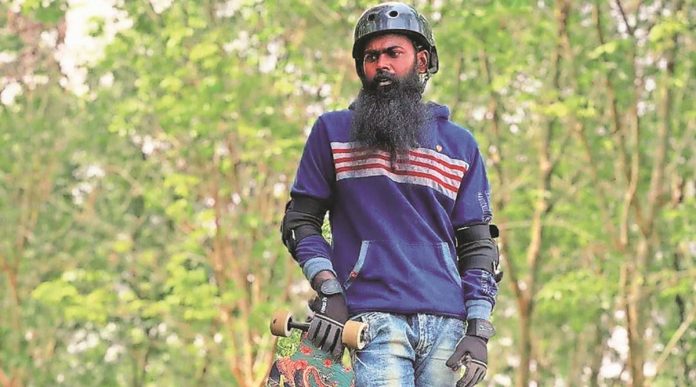 A Kerala youth’s journey on a skateboard from Kanyakumari to Kashmir came to a tragic end when he was killed in a road accident in Haryana’s Panchkula on Tuesday. A speeding truck hit Anas Hajas, 31, 7:30 am while he was on way from Pinjore in Panchkula to Nalagarh in Himachal Pradesh.

Investigation officer Ram Karan of Pinjore police station said: “He was on his skateboard when a truck hit him from the back and fled the spot. Some locals, however, noted the vehicle’s registration number and informed the police. Hajas was taken to the neighbouring Kalka Government Hospital where doctors declared him brought dead.”

A native of Venjaramoodu in Thiruvananthapuram, Hajas, had started on the 3511-km-long expedition on May 29.

In a video posted in a local village group’s social media account on July 30, Hajas, said he was only 600 kilometers away from Kashmir. “It may take another 15 days to reach Kashmir. These days, I am skating only 40 to 50 km a day. So far, everything has been safe. Thanks everyone,’’ he said in the video posted from the Haryana-Punjab border.

Hajas had launched the expedition to create an awareness about skating. Hajas, who had worked with an IT firm in Technopark at Thiruvananthapuram after graduating in Computer Science, had bought a skating board three years back and started training.

After completing the Kanyakumari-Kashmir leg on the skating board, he had planned next trips to Bhutan, Nepal and Cambodia.

Although he had been training regularly for long journey on his skating board, the trip to Kashmir had not been a pre-planned one. It was only a few days before he started the journey that Hajas informed his family and friends about the trip. He did not carry any luggage other than two pairs of clothes, a pair of shoes and his helmet.

In the initial days of his journey, Hajas covered up to 100 km a day. Later, following the advice of friends, he scaled down the distance covered in a day. A bachelor, Hajas had the backing of his father Aliyarkunji, who is employed in Saudi Arabia, and mother Shaila Beevi.

The Haryana Police have informed his family members who are expected to reach Kalka on Wednesday. Police said the body will be handed over to the family after post-mortem examination. Pinjore police has registered an FIR under sections 304 A and 279 of the IPC. (Agencies)