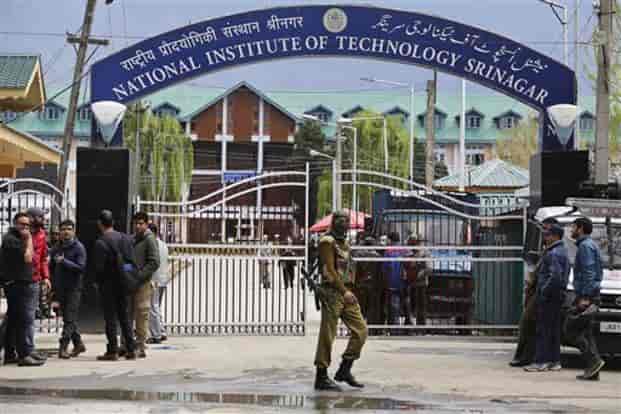 Srinagar: Following the directions from the Minister of Education (MoE), the National Institute of Technology Srinagar (NIT) is all set to implement official language Hindi (Raj Basha) and in this regard recently language inspection was conducted on the campus.

As per the statement issued to the news agency—Kashmir News Observer (KNO), in the initial interaction, Director NIT Srinagar, Prof. Dr. Rakesh Seghal, and Registrar Prof. S K Bukhari apprised the Director OL, MOE, Suniti Sharma about the progress in implementation of the official language in the campus.

Director OL also visited various sections of NIT and interacted with Heads of Departments (HOD), faculty members including in-charge of Hindi Cell to take an account of work being done for Official Language implementation.

She was informed that in the campus, there is a separate Hindi Cell which was created for the implementation of Raj Basha and Director NIT Srinagar had already conveyed to higher education department for the requirement of staff for establishing Rajbasha cell.

The orientation for officers, facility members was also held regarding its implementation in the institute.

Director Rajbhasha said the main objective of official language is to conduct the official transaction is one language (Hindi) throughout the country.

As per provisions of section 3 (3) of the Official Language Act 1963, the website of the institute should be bilingual (Hindi and English). Signboards, stationery items, forms, notice boards, rubber stamps, etc should be prepared in the regional language, Hindi, English as well.

“Official letters received in Hindi would be answered in the Hindi language,” it said.

In order to train and learn the official language, the Ministry has directed NIT Srinagar to use computer-based software’s, LILA ( Leaning Indian Languages Through Artificial Intelligence) Hindi Prabodh, Praveen and Pragya” software, etc. for the benefit of officers, employees, etc nominated for working in Hindi.

The LILA is a multi-media-based intelligent self-tutoring application for learning Hindi and other regional languages.

On the occasion, Director NIT, Srinagar Rakesh Sehgal said about the implementation of official language that they are duty-bound to fulfill the national mandate for its implementation

“It is a national mandate, the NIT Srinagar would be actively involved in the implementation of official language and fulfill its national duty,” he said.

Dr. Sehgal stressed to ensure maximum use of the official language and stated that faculty and other staff members have evinced a keen interest in learning Hindi.