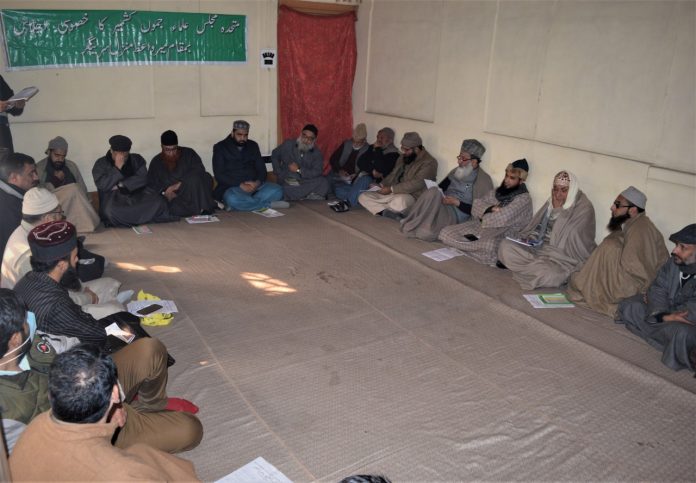 Srinagar: A meeting of Muttahida Majlis-e-Ulema Jammu & Kashmir was held at Mirwaiz Manzil Rajouri Kadal, Srinagar, after authorities disallowed it to be held at the Anjuman Auqaf headquarters at Jama Masjid Srinagar.

The meeting was presided over by the leading Islamic scholar of J-K Mufti Nazir Ahmad Qasmi, as MMU president Mirwaiz Umar Farooq continues to be under house detention for the past two and a half years since August 5th 2019.

On the occasion, it was proposed to form a sub-committee under the auspices of the Muttahida Majlis-e-Ulema to address some key issues facing the Kashmiri society.

The sub-committee will consider all the points of the proposed resolution that was adopted in the meeting , as well as stay in contact with the concerned for their implementation.

As per the resolution presented at the meeting, serious concern was expressed over the Kingdom of Saudi Arabia’s ban on a purely religious and da’wah organisation Tablighi Jamaat; and the government of Saudi Arabia was called upon to reconsider its decision.

The MMU during the meeting expressed strong concern and resentment over the blasphemous content published by a Delhi-based publisher ‘Jay Cee Publications’for the pictorial representation of the Prophet of Islam (PBUH) and the Archangel Jibra’eel (PBUH) in the History and Civics books of Class 7th.

MMU said, “From time to time conspiracies have been hatched against the religion of Islam, the Prophet of Islam (PBUH) and the Holy Qur’an, however from time to time, Islamic scholars and the Muslims have registered their strong protest against it.” It has asked publishers to consult Muslim scholars on Islamic issues before printing any material.it was also decided the sub-committee will be in touch with director school education for the same.

Appealing to scholars , imams , preachers and socio religious organisations of all schools of thought , MMU members in the meeting emphasised that the urgent need of the hour is to focus on the fundamental teachings and principles of Islam during their sermons and discourses, for the sake of greater unity among the Muslims and in order to resist the nefarious designs of anti-Islamic forces and discourage partial, partisan and centuries-old differences and conflicts among various sects of Islam . Those who still continue with a such a mindset to promte sectarianism will be exposed in public and held accountable, the Majlis-e-Ulema warned.

The meeting expressed deep concern and sorrow over the recent scandal of sale and purchase of Covid orphans by some unscrupulous people and strongly condemned , calling it as extremely shameful and inhuman. It observed with regret that running orphanages has become a lucrative business for some and this needs to be stopped.

The MMU has requested the responsible persons of the reputed orphanages in Jammu & Kashmir to take all possible steps for the bright future of the orphans in their respective institutions in view of the seriousness and sensitivity of the issue. In this regard, the MMU has also requested that from time to time, a team of the Muttahida Majlis-e-Ulema will visit the registered orphanages of Jammu and Kashmir, and will give its inputs and suggestions for the better future of the children there.

The important meeting underscored that the financial condition of the imams of mosques and madrassas and muezzins is dire , which needs immediate attention. Besides serious effort is needed to create an understanding among people, and an environment in society that supports talented young people who are proficient in reciting and understanding the Holy Quran and concerned of their social environment , to become imams .Those young people who have the potential to act as the deputies of the Messenger of Islam (PBUH). To encourage talented young people to take up this noble profession, it has to be economically attractive for them also so they can support themselves and their families. So a mechanism has to be put in place to ensure that the salaries of the imams are decent and attractive to them .

The participants in the meeting strongly protested against the closure of historic Jama Masjid Srinagar, the largest place of worship in J-K and the spiritual centre of the Muslims of the region, by the authorities for Friday prayers continuously from August 6, 2021.

They made it clear to the administration that such dictatorial measures amount to interference with religious practices which is a violation of fundamental human rights and also severely hurts the sentiments of Muslims.

The meeting expressed strong resentment over the continuous illegal and arbitrary incarceration of the Muttahida Majlis-e-Ulema chief and J-K’s topmost religious leader Mirwaiz-e-Kashmir Dr Moulvi Muhammad Umar Farooq who continues to be under house arrest since 5 August 2019.

MMU asked the rulers of the state to allow prayers at Jama Masjid on Fridays and ensure the immediate release of the Mirwaiz-e-Kashmir so that he can fulfill his centuries-old responsibilities the Institution of Mirwaiz enjoins upon him.