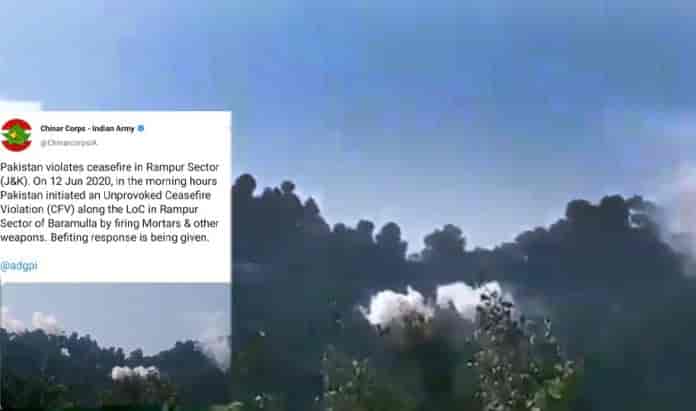 On Friday, 12 June, the Indian Army’s Chinar Corp tweeted a video purportedly showing a ceasefire violation by Pakistan in the Rampur sector of north Kashmir’s Baramulla district. The Army’s official Twitter account, however, retracted the post after social media users pointed out that the video was at least seven months older.

Alert Twitter users quickly pointed out links to posts on various social media, some dating back to 21 October 2019, that indicated the video was not recent. The same video was shared seven months ago on another social media platform, Reddit. Its video description claims it to be of “Indian shelling on villages of Azad Kashmir [Pakistan administered Kashmir]. Ongoing firefight can be heard in the background”. The video was again shared on 26 December 2019 on Youtube.

The Chinar Corps, Indian army, had tweeted at 4:35 pm today: “Pakistan violates ceasefire in Rampur Sector (J&K). On 12 June 2020, in the morning hours Pakistan initiated an Unprovoked Ceasefire Violation (CFV) along the LoC in Rampur Sector of Baramulla by firing Mortars & other weapons. Befiting [sic] response is being given.”

The official account of the Chinar Corps had also tagged the Army’s Additional Directorate General of Public Information (ADGPI) in the post. The post has since been taken down. The Army’s Srinagar based spokesperson Rajesh Kalia did not give an immediate clarification on the matter. This story will be updated as and when it is received.

Earlier today, a civilian identified as 40-year-old Akhter Begum was killed while at least five families from the Silikote village in Uri have fled to safer places, according to local newswire Global News Service. Simultaneously, a ceasefire violation has been reported from the Jammu region’s Poonch district.