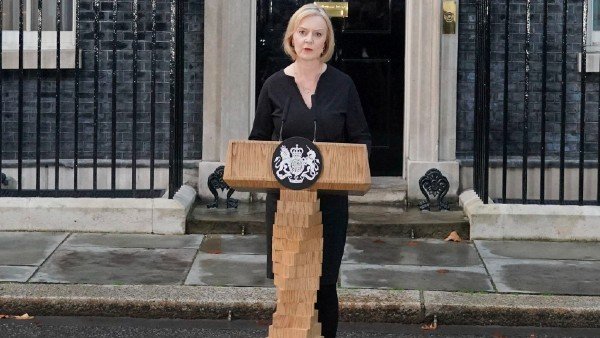 British Prime Minister Liz Truss has stepped down as the UK Prime Minister after facing an open revolt against her leadership as an increasing number of Conservative Party MPs called for her to resign amid mounting chaos at the heart of the UK government.

All eyes are now on former chancellor Rishi Sunak to be parachuted in to take charge.

Truss became the shortest-serving British Prime Minister with a tenure lasting for only 45 days.

Sir Graham Brady, the senior-most Tory backbencher as the chair of the 1922 committee, on Thursday met with her for an unscheduled meeting at Downing Street as at least 13 Tory MPs openly called for Truss to go.

Under the current rules, Truss technically could not have faced a leadership challenge for at least 12 months but there have been growing murmurs of either a swift change of rules or an ultimatum to her that she no longer has the support of her colleagues.

Sunak, who lost out to Truss’ now failed tax-cutting agenda in the leadership race last month, is seen as a key contender to step up to the post. But the picture remains extremely uncertain due to deep infighting within Tory ranks. Loyalists of former Prime Minister Boris Johnson believe the party should bring him back, given his solid electoral mandate from the 2019 general election.

However, Truss’ current troubles have been reminiscent of how Johnson was dragged out of office and forced to resign in early July amid an open revolt by a growing number of his MPs and ministers.

Truss’s resignation comes a day after Suella Braverman’s explosive exit from the Cabinet after admitting a breach of the ministerial code by discussing government policy in private emails and a scathing parting attack on her boss.

However, while stepping down from her post, Braverman, the minister responsible for immigration and law and order, criticised Prime Minister Liz Truss, saying she had “concerns about the direction of this government”.

Although Braverman, who belongs to the Conservative’s far-right wing, cited a “technical breach” of government as her reason to quit the party, it is evident how her differing views from Truss forced her out of the party.

“Not only have we broken key pledges that were promised to our voters, but I have had serious concerns about this government’s commitment to honouring manifesto commitments, such as reducing overall migration numbers and stopping illegal migration, particularly the dangerous small boat crossings,” reads the Indian-origin former Home Secretary’s resignation letter.

Her exit came over what experts believe was a relatively low-level ministerial breach but reflects more serious differences between Braverman and Truss over the country’s immigration policy.

The former Prime Minister attempted to move on from the latest crisis by swiftly appointing Grant Shapps as the new Home Secretary. But coming just days after she sacked Kwasi Kwarteng as chancellor and brought in Jeremy Hunt who has since reversed all of her economic agenda, the latest Cabinet upheaval was widely expected to only speed up Truss’ exit from 10 Downing Street. (PTI)