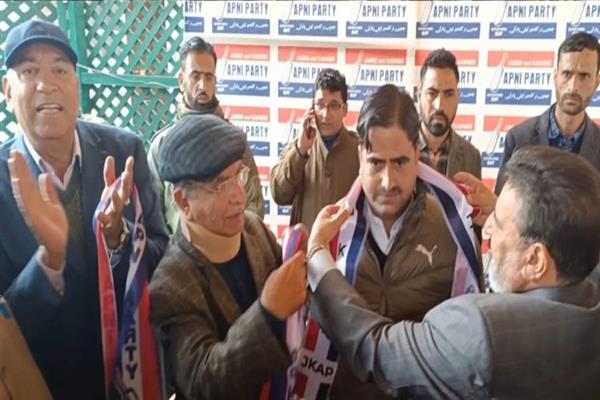 They joined the Apni Party along with his workers and supporters.Imtiyaz is the son of the slain counter-insurgent commander, Kuka Parray.

According to a press release issued by the party, Apni Party President Syed Mohammad Altaf Bukhari gave a warm welcome to the new entrants into the party fold.

On this occasion, Alltaf Bukhari while greeting the new entrants said, “I on behalf of the entire party leadership welcome you into the party fold; I hope your presence will strengthen the Apni Party further in your areas,” it reads.

He promised the new entrants that party leadership will always support them to serve the people.

He said, “Apni Party’s key agenda is to serve the people and I assure you that the party will be behind you when you are working to serve the masses in your respective areas.”

He advised them to build a strong bond with the people. He said, “You must always be connected with the people at the grass root level because they expect you to help them to get public issues resolved. Therefore, I would suggest you keep yourself available to the people of your areas and identify the public issues in order to bring these issues to the notice of the concerned official for quick redressal.”