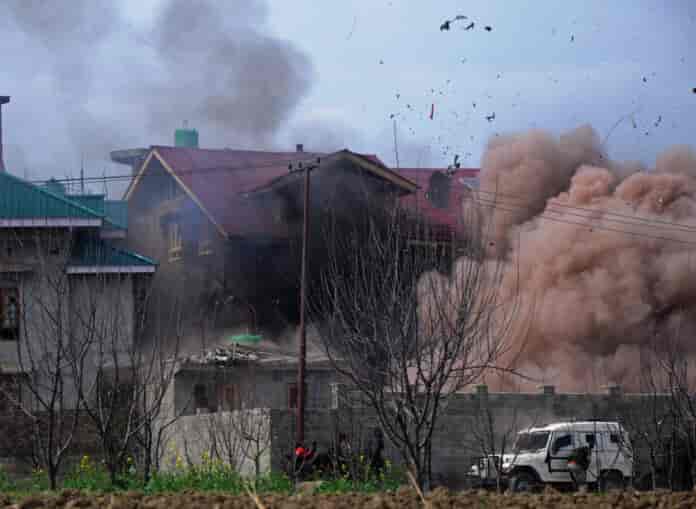 The video opened with these lines being sung to the rhythm of the 19th century Italian folk song Bella Ciao, an adaptation of which had become an anthem of the resistance movement against the fascists during the Second World War.

This adaptation in Kashmir’s context refers to Cordon and Search Operations that Indian Army officers described as a “humane” approach of “psychological dissuasion” even as they admitted that it does “harass the civilian population.”

As the song progresses, a seal emerges to fill the frame. Inside a chrome ring, a fist clenching an arrow stabs a swastika on a swallow-tailed flag, which later in a logo appears to be a saffron flag much like the emblem used by the Rashtriya Swayamsevak Sangh.

The group announced itself as the People’s Anti-Fascist Front (PAFF).

The PAFF’s introduction on Kashmir’s militant landscape was rare and surprising, for the reason, that there was an overt dissociation in its terminology from Islamic semantics and there was a pattern to what was happening.

Prior to the emergence of the PAFF, another group had announced its formation on a similar, secular, precept: The Resistance Front (TRF). The TRF, obvious from the deaths of its cadres, is a rebranded Lashkar-e-Toiba. The incarnation, again, made a deliberate miss out at Islamic signage.

While most militant attacks carried out in the last three years were claimed either by the TRF or the PAFF, the others – with Islamic labellings – began to fade out. The groups like Hizbul Mujahideen (Group of Mujahideen), Lashkar-e-Toiba (Army of the Righteous) and Jaish-e-Mohammad (Army of Mohammad) suddenly went silent and out of circulation.

The introduction of these new secular militants groups remains the most stark ideological makeover of Kashmir’s militant movement, which has otherwise embedded and identified itself deeply with Islamic identity.

These outfits emerged after New Delhi unilaterally passed the Jammu and Kashmir Reorganization Act to annul J-K’s limited-autonomy in 2019.

In August 2020, nearly a year after New Delhi had claimed that the abrogation of limited-autonomy will end the militancy in Kashmir, TRF released a rare footage of a live ambush on government forces in north Kashmir’s Kreeri area, killing one police and two paramilitary personnel. In the following months, two more ambush videos were released by the PAFF.

Towards the end of the two minutes and twenty seconds video from Kreeri, an attacker is heard shouting in Arabic: “Hal min mazeed (Are there more?)”. The attacker had quoted a verse from the Quran in which Allah warns of the day when hell is asked if it has been filled with disbelievers, Muslims as well as non-Muslims, but would still ask “Are there more?”.

“By releasing video of attack, terrorists want to glamourise terrorism. But they can’t,” the Jammu and Kashmir police had tweeted.

The Quranic reference in Kreeri and the use of Islamic idioms in few other videos, however, points to a disconnect between the leadership and the cardres on the ground. The idea behind militant propaganda remained the same, a senior police official told The Kashmir Walla. “There is no disconnect between the older idea of the mujahid and the newer idea of the mujahid.”

The symbolism now espoused by these new militant outfits is “less emotive to a large scale but it seems to be part of a plan”, the police official said. “If you look at it, this is something which is understood across OGWs, the whole gamut of tanzeems that this is to be done because of the FATF grey list and problems thereof.”

Besides the use of more globally accepted symbols and phrases, the militants have also resorted to disseminating more statements in the English language to reach a wider audience and without “risking a mistranslation,” the official said. “It is designed for a larger Indian and international audience.”

A new narrative ostensibly aimed at winning over international opinion, however, isn’t enough. “That is why they will stop everything else,” the official elaborated, pointing to the absence of intense fidayeen attacks. “It’s a matter of scoring brownie points and trying to cut away from the roots of what is seen as the global jihad or the Islamist expansionism.”

There had been an emergence of shadow outfits in the past as well, only to fade away as international pressures eased, particularly as seen in the aftermath of the 9/11 attack that prompted the United States to launch the “War on Terror”. But “it would be a foolish move to go around even if the pressure goes off and you are off the grey list,” the police official added.

Already, the traditional pro-Pakistan outfits fiercely competed with — ideologically but also physically — the emerging pan-Islamist outfits who have been described as “Indian agents” by the pro-freedom political leadership.

“It’s a start for them and they can invest in it for a good twenty to thirty years and then years down the line perhaps they become different,” the police official analysed. “The TRF [eventually] takes a path that has nothing to do with Lashkar or Jaish.”

Will the militancy’s shift to secular ideals be accepted by the militant cadres?

“Everything is crystal clear,” said the official. “They know why it’s being done and they wholeheartedly support it … perhaps there is also a genuine realisation that the secularisation of this so-called movement is also good and specially at this point in time this is a very clever thing to do.”

The militancy not only retreating from social media but also shifting gears on the ideological front could possibly lead to varying degrees of indifference within the public. “Things are meant to look cool,” the officer said, “but underneath a lot of construction and reconstruction and reorganisation is happening.”

The floodgates of propaganda by the militants had opened in 2015 after the iconic image of eleven armed and unmasked Kashmiri youth brought them into the spotlight. The narrative thereafter was moored in reaffirmation of their Islamic faith.

The post-2015 imagery widely disseminated through social media often depicted militants offering prayers or breaking their fasts during Ramzan under trying circumstances, at times with meagre quantities of food under tarpaulin sheets while it was snowing or raining.

The region’s largest militant outfit, the Hizbul Mujahideen, or the Army of Mujahideen, in its pre-recorded statements often seated a commander behind a green table adorned with weapons and ammunition but also importantly copies of the Quran and began their statements with prayers or quoting Quranic verses.

Their narrative referred to the militants as mujahideen and prominently placed the idea of “shahadat” — martyrdom. It resonated with Kashmir’s predominantly Muslim society that has historically found succor in faith — in shrines, faith healers, and devotion.

The use of Islamic idiom by the pre-August militant outfits, however, ceased after an attack on a paramilitary convoy in south Kashmir’s Pulwama in February 2019 brought international focus on the region, where pan-Islamist outfits had emerged just a year before.

The suicide bombing killed at least forty troops and was unanimously condemned by the international community. The attack was claimed by the Jaish-e-Muhammad, in a pre-recorded video by the attacker Adil Dar, a 19-year-old Kashmiri.

Immediately in its aftermath, India blamed the attack on Pakistan which at that time was months away from its October 2019 deadline to fulfil the criteria laid down in an action plan by the Financial Action Task Force (FATF).

Ali Ahmed, a former infantry officer in the Indian Army who has served in Kashmir and later served as a senior political affairs officer with the UN, said that for Pakistan, Islam had always been “a very useful tool to attract people to go across [to Kashmir] and do mischief. There is money in it and there are volunteers.”

Outfits like the TRF on the other hand, Ahmed said, “may not attract the funds that are required to keep the whole thing going. So even if there is a [later] reversion to Islamic symbolism that doesn’t necessarily mean Islamism is resurging [unless] if the Islamist energy is diverted to Kashmir by Pakistan.”

Pakistan at the moment is waiting as the events unfold in Afghanistan after the US withdrawal, said Ahmed, adding that these events could “encompass” Kashmir. “If the Indians play hardball, the Pakistanis have got this lever,” he said.

“Then you would need Islamism because it gives you the kind of energy to take on a state as powerful as India. If Islamism has seen the back of the Soviet Union and the United States, it will be possible to think that it will at least tie India down in Kashmir.”

Two months after the attack in February 2019, Narendra Modi won a second term in India. Then in August, J-K was besieged and unilaterally assimilated into the Indian Union with direct federal oversight.

It was a time when more than twelve million residents of J-K were cut off from the outside world as well as from each other as New Delhi imposed the most draconian lockdown — and a months-long communication blockade — in the history of any democracy.

As the communications blockade, including the longest shutdown of the internet, was slowly lifted, a new narrative of militants emerged after a long silence — nearly sanitised of all Isalmic vocabulary; armed Kashmiri men were no longer mujahideen but “freedom fighters” resisting the “forces of Hindutva”.

These new outfits no longer bear any links to their Muslim identity either. Their tables are now sans the green cloth and copies of the Quran and the customary flag of Pakistan in the backdrop is sometimes replaced with a digital imposition of a library.

Mohammad Junaid, a Kashmiri anthropologist based in the United States, believes that the shift in the militants’ idioms may not be simply for optics. “Maybe they are really sincere,” he said. “They might be studying the situation in India actually quite accurately in seeing the current Indian regime as a fascist government and organising themselves accordingly.”

The militants, Junaid said, “do draw sustenance and some sort of ideological succor from geopolitical context but they are located in Kashmir, embedded in the society, and they see Kashmir as a place with its own specific history and arena of their activism and militancy.”

Already the series of events since August 2019, a move widely perceived by Kashmiris as the beginning of a process of disempowerment and dispossession of Muslims resulting in the eventual dilution of their cultural identity and ethnic demography.

The new militants are possibly impacted by this “traumatic event” of August 2019, Junaid pointed out.

The Hizbul Mujahideen, for instance, “is in some ways, the product of the 1980s when the situation in the Muslim world was different”. The eruption of insurgency in Kashmir was preceded by the defeat of the Soviets by the US backed Afghan Mujahideen in February 1989.

While the Hizb and before it the J-K Liberation Front’s vision for a future were known, Junaid said that the new outfits “see themselves only as resisting the Indian regime and fighting the regime. There is no evidence of what kind of order they want in Kashmir”.

Junaid said that there has never been a clear answer on the nature of the insurgency in Kashmir “because there has always been strains of both Islamic and, for the lack of a better word, nationalist”. But for the moment, “internally a lot of Kashmiris are searching for answers”.

“It hasn’t manifested yet,” Junaid noted. “What you are looking at is perhaps the seeds and saplings emerging.”