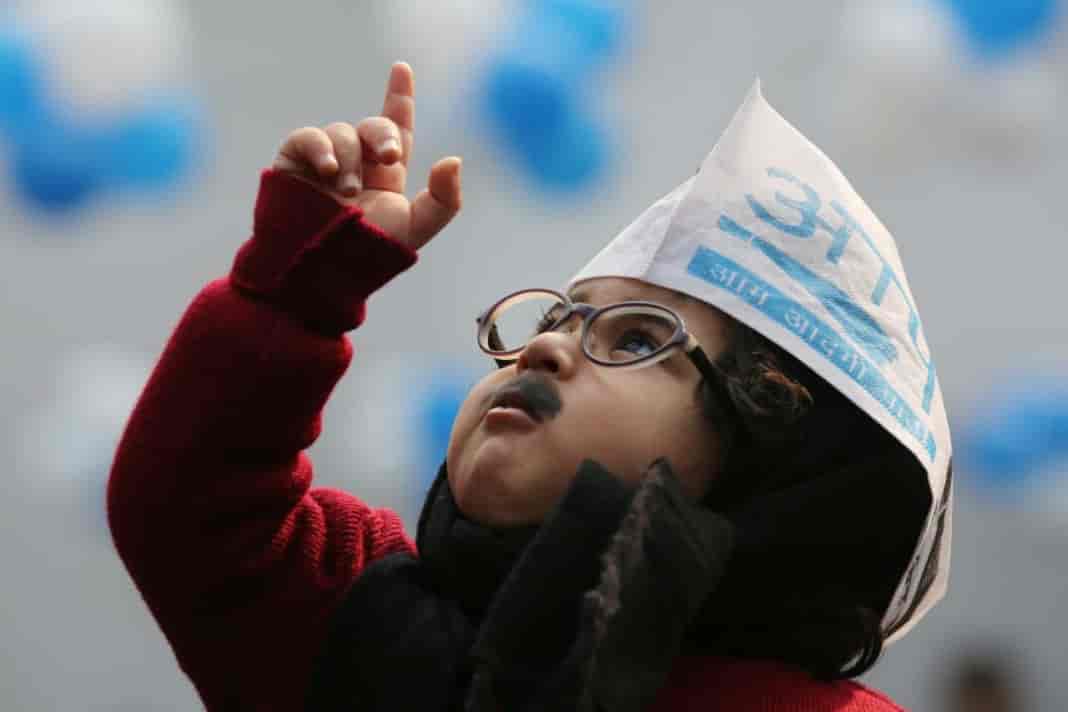 The political science student at the University of Kashmir switched from one channel to another as Arvind Kejriwal, the national convener of Aam Aadmi Party (AAP) and its Chief Minister (CM) candidate, kept decimating the opposition. With every passing hour the lead for the party, which has carved its way on the heels of developmental work, grew manifolds; so much so that it ended with sixty-two seats out of seventy.

The win was huge for many reasons, but majorly because the AAP had defeated country’s largest political party – Bharatiya Janata Party (BJP), which had gone all guns blazing in its campaign. From Prime minister Narendra Modi, Union Home Minister Amit Shah, and CM of the country’s largest state – Uttar Pradesh – Yogi Adityanath staged a highly polarizing campaign, with putting in a lot of money.

By about 1 pm, the news anchors had announced that the lead for the AAP was unassailable and the party will be forming the government for the third time – the happiness of Mr. Ahmed knew no bounds; he started calling and texting his friends and family about the imminent Kejriwal win.

“It was a defeat of fascism,” says Mr. Ahmed about the BJP’s loss, “and of a party that has become very arrogant.”

It’s an electoral defeat for the BJP, but is it an ideological one as well? The vilifying campaign with its candidates and ministers polarizing on religious lines mainly focused on how Delhi should “push the button [on EVM] so hard that the current is felt hard in Shaheen Bagh.”

Statically, though, the BJP grew in comparison to the last assembly polls by five more seats and an increased vote-share.

That day, on 11 February, Kashmir was observing a shutdown to mark the death anniversary of Maqbool Butt, the founder of Jammu Kashmir Liberation Front (JKLF). In the same light, authorities also snapped already a nightmare 2G internet services.

In Kashmir, like Mr. Ahmad many others found themselves glued to the television watching the AAP celebrate their win. By afternoon, when the internet resumed, the celebration became evident as people took to social media to express their views on Mr. Kejriwal’s win.

On social media, most Kashmiris hailed Mr. Kejriwal for the win; but more than his win, the happiness arose from the – popularly claimed as an ideological – defeat of BJP. But, was it?

The BJP’s religious rhetoric caught AAP in hot water. While the BJP alleged that Mr. Kejriwal is supporting protests against a new citizenship law – which grants citizenship on the basis of religion, discriminatory against Muslims; Mr. Kejriwal very conveniently kept himself away from the debate.

Mohammad Aslam, a 52-year-old businessman, who claims to be politically sound and a pious news-junkie says that he was very happy at Mr. Kejriwal’s win despite him resorting to what many term as soft Hinduism to win the elections. “I know he recited the Hanuman Chalisa on television, but he is not as vile a Hindu like in BJP,” says Mr. Aslam, “they are dangerous.”

“Even I recite [the] Quran, does that make me an extremist?” questions Mr. Aslam. “Similarly Kejriwal reciting Hanuman Chalisa is no extremism.”

However, it didn’t take long for a counter sect of Kashmiris on Twitter to remind people, who were going gaga over the AAP’s win, the party had supported the abrogation of Article 370. Mr. Kejriwal had said: “We support the government on its decisions on Jammu and Kashmir. We hope this will bring peace and development in the state.”

“Before you support Keju, remember he supported the decimation of your identity,” wrote a user on Twitter. A few others defended their joy, saying, “It’s always better to choose a lesser evil.”

The joy of Kashmiris became further evident when a few activists from the AAP celebrated the win in Langate village of Kupwara, north Kashmir. Whether or not that event was funded is a different question, the fact remains that it was a political engagement outside the chambers of offices of political parties in Kashmir where three former chief ministers remain under detention; booked under the Public Safety Act.

Calling the reaction of Kashmiris as obvious, Noor Mohammad Baba, professor of Political Science at University of Kashmir, says, “Any setback to BJP will be appreciated by people of Kashmir. Their policies with respect to people here or for that matter Muslims in India are not appreciated.” He adds that the BJP is seen as an adversary for the policies it has adopted here and “an adversary of adversary is always appreciated.

Shahnaz Ali, a 31-year-old resident of Srinagar believes that Kashmiris were happy because they felt the enemy who had subjugated them for seven months had lost. “See, there can be many theories on to why Kejriwal won. Whether it be AAP not taking on [Narendra] Modi or not supporting protests at Shaheen Bagh,” he says, “Kashmiris are politically aware community and they understand that Kejriwal chose soft Hinduism to win the elections.”

Mr. Kejriwal’s win was not only hopeful for those people who are fed-up of right-wing extremism in the country, but also for those Kashmiris who see him as a potential candidate for Prime Minister in the future. A very unlikely scenario, though.

“What [Narendra] Modi and [Amit] Shah did was unprecedented, and then the way they did is unbelievable… so naturally, Kashmiris will support or at least show their support towards whosoever defeats the BJP,” explains Mr. Ali. “BJP’s defeat acted as some sort of relief for the people from the decision [of abrogation of Articles] that has shaken them inside out.”

While it is an undeniable truth that Mr. Kejriwal not only chose soft Hinduism and shied away from criticizing Narendra Modi, the fact remains that the likes of Mr. Ahmad and Mr. Aslam will continue to celebrate even if it means another evil – at the end.