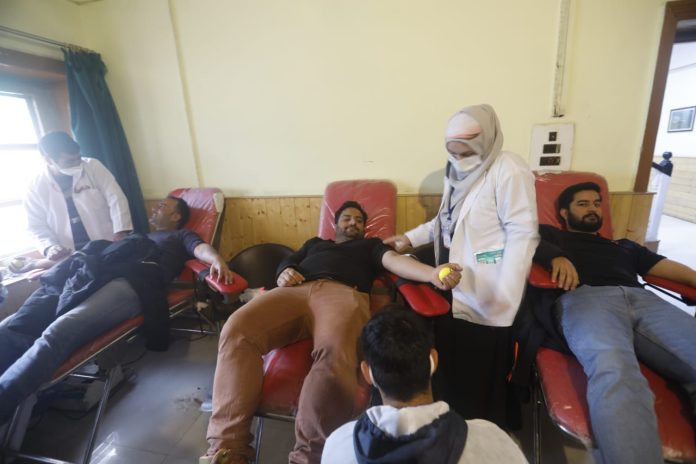 Kashmiri journalists on Tuesday organized a blood donation camp in the memory of the colleagues who lost their lives in the past few years, here at Press Club.

The fraternity remembered the journalists- Mudasir Ali, Javed Ahmad, Shahid Bukhari and others who died at a very young age.

Besides blood donation camp, a conference was also held wherein journalists remembered their colleagues and paid them tribute.

While speaking on the occasion Jehangir Ali, a freelance journalist and the brother of late journalist Mudasir Ali said, “My brother always helped the young and budding journalists and wanted them to take this profession very professionally.”

“There is no process where journalists’ families get help if they lose their lives. The fraternity should also look into this issue as well,” he said.

He added, “There should be a mechanism or a body which would look into the issues of the journalists to which they often fall in.”

Hakeem Irfan who works with Economic Times said, “Journalists like Mudasir upheld the basic principles of integrity and telling truth. We are duty bond to follow their principles.”

Riyaz Malik, President Urdu Journalists Association (UJA) said that more such events should be done where we can remember the journalists who have been killed or died of natural causes. “We should also work to hold award ceremonies, lectures and arrange funds too to help their families,” he said.

Rising Kashmir journalist Irfan Yatoo said, “Javaid was a wonderful human. I have learnt a lot from him and in fact I consider him my mentor as he edited my first copy.”