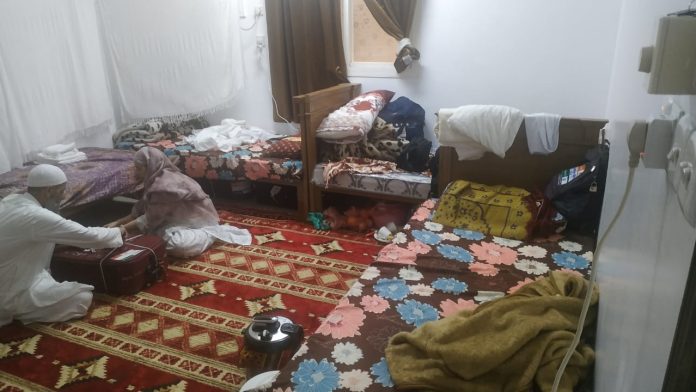 Multiple pilgrims complaint about the accommodation facilities as five pilgrims are staying in a hotel room wherein only two people can be accommodated.

“We have literally been sandwiched. How can five people live in a small room along with lugagges is beyond my comprehension? Covid protocols have gone for a toss and on top of that you have to queue up literally to perform ablution. And by the time you perform ablution, you have to run to reach the mosque,” said one of the Hajjis from district Srinagar to Kashmir Walla.

Most of Hajjis also have not been provided with Hujaj. A Hajj official on the condition of anonymity said that at least 8 flights which left from Srinagar to Medina are without Khadim-ul- Hujaj.

Another Hajji said the Spicejet flying pilgrims to Medina hardly had any leg space. “Flight journey was literally nightmare. It by no means was an international flight. Imagine 9 hour long journey without moving your leg. Old people especially women were withering with pain.”

On being asked whether they raised the issue with the concerned officials, one Hajj said that he talked to CEO Abdul Salam Mir over the phone and he said that he will look into the issue.