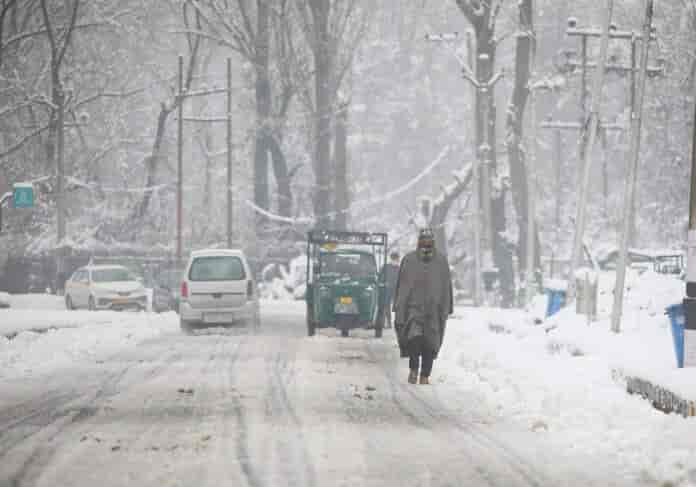 Kashmir Valley received snowfall, leading to closure of several far-off roads besides delay in flights to and fro the Srinagar ‘international’ airport on Monday.

A meteorological department official here told GNS that while it was snowing, Srinagar, recorded rain and snowfall of 7.1mm since overnight till 0830 hours today.

Gulmarg recorded had 8.4 inches (21cm) of fresh snowfall during the time and the mercury settled at minus 5.0°C against minus 5.8°C on the previous night at the world famous resort, he said.

Qazigund, the gateway town of Kashmir, had 4.0mm of rain and snow during the time while as it recorded a low of 0.6°C against 1.4°C on the previous night, he said.

Pahalgam, the famous resort in south Kashmir, had 13.5 cms of snowfall and recorded a low of minus 1.2°C against minus 3.0°C on previous night, he said.

Kokernag, also in south Kashmir, had 1mm of rain or snow even as it recorded a low of minus 0.4°C against 0.6°C on previous night, the official said.

Kupwara town in north Kashmir, had 5cms of snowfall and recorded a minimum of 0.2°C against 2.0°C on the previous night, the official said.

Reports reaching GNS said that Bandipora-Gurez road was closed due to fresh and continuing snowfall. 5 inches of snow had already accumulated at Gurez, 9 inches at Razdan top, 5 inches at Tulail and 4 inches at Dawar, they said.

Reports said that there were 6 inches of snowfall recorded at Sonamarg to Bajri Nallaj in Ganderbal.

Also Machil, Karna and Keran roads have been closed as higher reaches of Kupwara received 1.5 ft snow amid continuing snowfall.