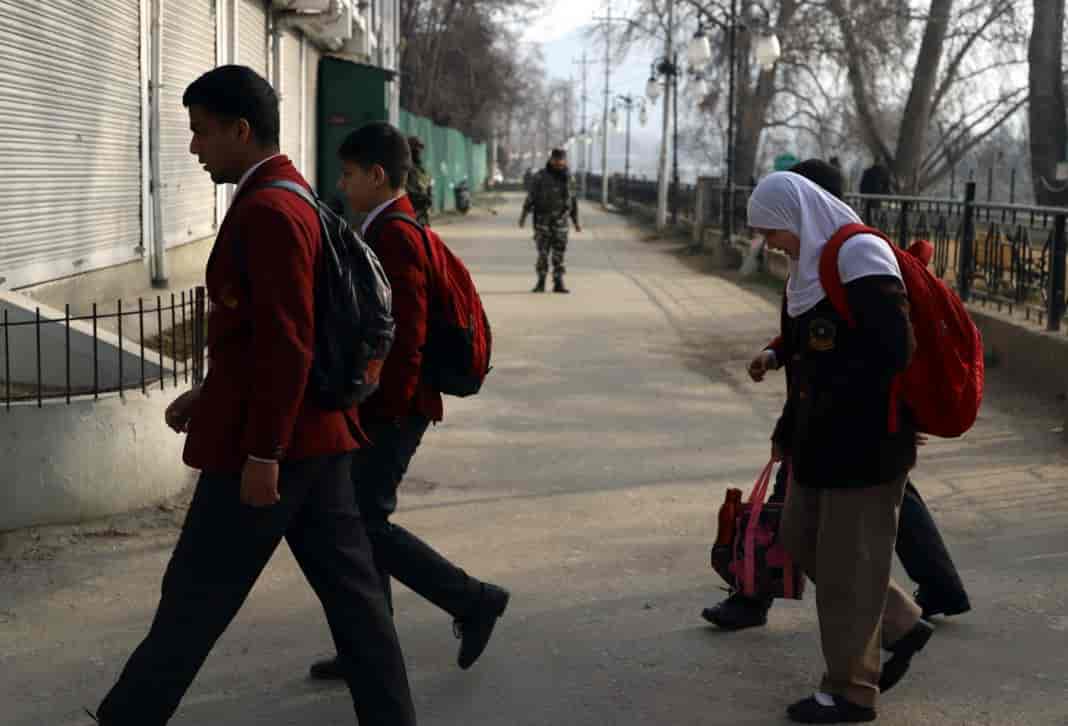 Srinagar: He knows the conventional wisdom: study for at least twelve hours every day, and you might stand a chance at “cracking” the admission tests for India’s elite engineering colleges.

Locked down in the COVID-19 pandemic, Shayiq Ahmad Rather, a twelfth-grader at a government-run school in Ganderbal district, central Kashmir, is trying to follow this routine. He is currently reading about magnets in physics, he says, “but these are difficult concepts. I can’t figure them out on my own.”

Last year, along with tens of thousands of eleventh-grade students in the Valley, Mr. Rather took his school examinations having attended just a little over five months of classes till August 2019, when the central government clamped down and scrapped the erstwhile state’s constitutional special status. Schools remained shut amid the heightened tensions, a communications blackout, and a civilian-observed shutdown of public activity. Mr. Rather’s classes resumed only when the new academic year began on 24 February.

About two weeks later, Jammu and Kashmir (J-K) administration shut down the schools again to contain the spread of the novel coronavirus. A countrywide lockdown is presently enforced till end-April, and restrictions are expected to continue further.

Despite continued pressure in the pandemic to remove its eight-month-long restrictions on internet connectivity, the J-K administration continues to allow mobile internet at only 2G speed.

Unlike students elsewhere in the country, however, Mr. Rather is not signing into classes remotely during his isolation. Despite continued pressure in the pandemic to remove its eight-month-long restrictions on internet connectivity, the J-K administration continues to allow mobile internet at only 2G speed.

“The internet speed restrictions have, while enabling access to essential services and sites, not posed any hindrance to COVID-19 control measures or to access online educational content, but checked the unfettered misuse of social media for incitement and propagating/coordinating terror activities,” reads the most recent government order for continuation of the curbs.

J-K Private School Association has also pleaded in the apex court for the restoration of 4G internet connectivity, arguing that the slow-speed internet is not enough to conduct virtual classes. The court issued a week notice to the J-K Administration to respond.

Around 1.47 lakh students are enrolled in thousands of government-run and private schools across Kashmir Valley.

The education department has begun rolling out remote classes on Zoom, a video conferencing app, for students at government-run schools. Hilal Ahmad Lone, a school teacher and the nodal officer for information and communications technology in Ganderbal, has been remotely training his colleagues across the Valley on how to use the app, so that they can resume classes with their students.

However, only about ten students can join a class at a time, given the narrowband speed of the internet, said Mr. Lone. Out of the more than 500 schools in the district, about thirty have started conducting classes on Zoom, he added.

The first few days into the COVID-19 outbreak, when schools had been ordered shut but public movement was still allowed, the education department had planned to broadcast classes on local cable television networks. But after the lockdown, teachers could not step out of their homes to record the classes at the studio, said Nahida Nilofar, Chief Education Officer of Ganderbal.

“Zoom is anyway better than televised classes because it is interactive,” said Ms. Nilofar. “It will be very helpful if the internet speed improves.”

Unlike televised classes, however, remote classes are out of reach for students such as Mr. Rather; he doesn’t own a smartphone. His father, a daily wage labourer, uses a Nokia 105 feature phone.

Parents of younger children, on the other hand, are facing new pressures. From 10 am to 2 pm every day, Masarat Shaheen, a resident of Sadarbal neighbourhood in Srinagar, supervises the remote classes of her son, who studies in kindergarten at the missionary-run Burn Hall School in the city. “My son is too young and cannot operate the phone entirely on his own,” she says, “so I always have to keep an eye while doing my housework.”

“There is no voice clarity because of the internet speed,” says Ms. Shaheen. “The live video often gets stuck. We can’t ask the teachers to repeat themselves again and again.”

We do have a problem uploading them. It sometimes takes ten or eleven hours to upload a five-minute video.

And she is also concerned about her son getting increasingly dependent on the smartphone. “I used to keep him away from personal technology devices,” she says. “But now it’s not easy to take the phone away from him even after the class has ended.”

At Hista Higher Secondary School in Anantnag district, south Kashmir, teachers are holding daily classes through WhatsApp video calls. “We have three hour long classes of physics, chemistry, and maths, and then a fifteen-minute brush-up for English,” said Faisal Hamid, an eleventh grader at the school. But WhatsApp allows a maximum of four participants to join a video call. So his class of forty-one students has been divided into groups of three, and every teacher is having to discuss the same course material several times over with the different groups.

In Srinagar, Delhi Public School has ramped up uploads of recorded classes on its YouTube channel. “Due to the circumstances in the Valley where there are continuous lockdowns over the academic year, we are continuously in the process of recording our classes, and are well-prepared with these video lessons,” said Alistair RA Freese, principal of the school.

“Most of our students are able to load the classes, because we have reduced the quality of the videos,” Mr. Freese said. “We do have a problem uploading them. It sometimes takes ten or eleven hours to upload a five-minute video.”

Meanwhile, the education department has not given up on the idea of televised classes. A handful of teachers have been asked to record classes that can be sent to a local cable television channel for telecast, said Mr. Lone.

While the students in the Valley may not be able to look at an upside of the internet restriction, Mr. Hamid does see a benefit in the lockdown. “Now that there is nowhere to go and nothing to do, we don’t have much of an option except to sit at home and complete the homework that we are given” during the WhatsApp classes, he says.

Kuwar Singh is a Reporting Fellow at The Kashmir Walla

Life and legacy of Reshma: Kashmir’s most influential transgender figure