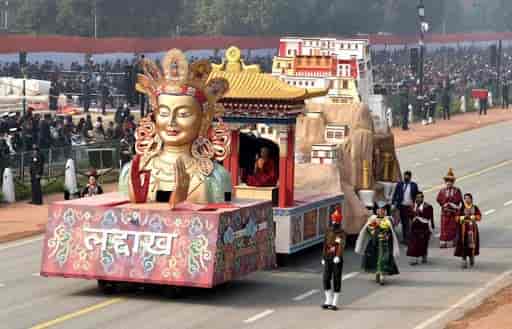 The chairman of Ladakh Autonomous Hill Development Council (LAHDC), Kargil, has complained that Kargil’s religious and cultural ethos have been ignored in the Union Territory’s Republic Day parade tableau.

In a letter to the Lt. Governor of Ladakh, it that since this is the first time ever that Ladakh will have a tableau of its own on Republic Day, LAHDC (Kargil) chairman Feroz Ahmed Khan said that every region of the state should be represented on the tableau.

“It is unfortunate to note that only a single aspect of Ladakhi culture has been incorporated for display on Ladakh’s Republic Day 2021 tableau, thereby failing to showcase the rich and diverse religious-cultural fabric of Ladakh. It is felt that partial representation of the UT at an event as prominent as the Republic Day celebration alienates the people of Kargil district,” Khan’s letter stated.

Khan has urged the governor to issue necessary directions “to those concerned” to incorporate Kargil district’s cultural heritage in the tableau.

LHDC, Leh was constituted in accordance with the Ladakh Autonomous Hill Development Council Act of 1995 during PV Narasimha Rao’s regime, and its first election was held in 1995. Later, during Mufti Mohammad Sayeed-led PDP rule in 2003, a similar council was established for Kargil district. Over the years, the people of Kargil have been complaining that the district in spite of being more populous than Leh, is being ignored in various aspects and Leh is being projected as Ladakh.

A political activist from the region, Sajjad Kargili while taking to his Twitter termed the development as Isalmophobic,  “Strongly condemn UT admin. for ignoring religious & ethnic identities of Ladakh and disrespecting their sacrifices. The UT admin. is trying to project entire #Ladakh as one particular identity. All need to be taken on board this step seems #ISLAMOPHOBIC. (SIC),” he tweeted.

In another tweet, he said that “patriotic sentiments” of the majority in Ladakh were being ignored, “On the republic day when we forget differences and celebrate unity in diversity. For this day, a tableaux of Ladakh have been made to display in the RD parade, the tableaux been made by the UT admin. which deliberately ignores the patriotic sentiments of the majority in #Ladakh. (SIC).”