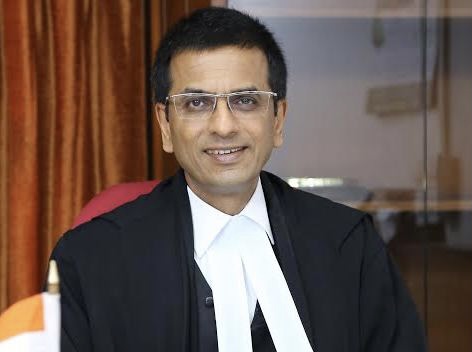 Justice Dhananjaya Yashwant Chandrachud was sworn in as the 50th Chief Justice of India on Wednesday, reported Press Trust of India (PTI).

President Droupadi Murmu administered him the oath at a brief ceremony held at the Rashtrapati Bhavan.

Justice Chandrachud takes over as the head of India’s Judiciary from Justice Uday Umesh Lalit, who demitted office on Tuesday.

Justice Chandrachud has played a pivotal role in digitisation of the judiciary and been part of benches that delivered landmark verdicts on issues such as the Ayodhya land dispute, Section 377 and right to privacy.

The apex court’s most senior judge follows in the footsteps of his father and former chief justice of India, the late Y V Chandrachud, who was at the helm of the judiciary from 22 February 1978 to 11 July 1985 and was India’s longest serving CJI. This is the first instance of a father and son occupying the highest seat of justice.

CJI Chandrachud, often referred to as DYC in legal circles, was sworn in by President Droupadi Murmu. He takes over from Uday Umesh Lalit, who recommended him as his successor to the Centre on 11 October.

Unlike his predecessor who served for 74 days, India’s new CJI will be in office for two years till 10 November 2024. Supreme Court judges retire at the age of 65.

Justice Chandrachud, born on 11 November 1959 and considered a Delhi University product who studied in St Stephen’s College and the Campus Law Centre before going to Harvard, was elevated to the top court on 13 May 2016.

Counted as a judge who enriched the verdict docket’ of the apex court, Justice Chandrachud is viewed as sharp, articulate and forward looking. Expected to advance judicial frontiers, he was a member of benches that delivered judgements on decriminalising part of Section 377 of the Indian Penal Code and the entry of women in Sabarimala.

The list of important judgements that settled many a debate is long.

He was also part of an important verdict expanding the scope of the Medical Termination of Pregnancy Act and the corresponding rules to include unmarried women for abortion between 20-24 weeks of pregnancy, reads the report.

Justice Chandrachud was among the two judges of the apex court collegium who recently objected to the method of “circulation” adopted for eliciting the views of its members on the appointment of judges to the top court.

During the COVID-19 pandemic, a bench led by Justice Chandrachud passed several directions to address the miseries faced by people while terming the second wave a “national crisis”. The bench, for instance, directed the Centre to ensure supply of oxygen to hospitals across the nation for proper treatment of patients.

Known as a doer, he presided over a bench that worked five hours beyond regular working hours on 30 September 2022 to hear 75 cases to clear the board before the onset of the Dussehra vacations.

In a landmark verdict in February 2020, a bench headed by Justice Chandrachud directed that women officers in the Army be granted permanent commission and command postings, rejecting the Centre’s stand of physiological limitations as being based on “sex stereotypes” and “gender discrimination against women”.

Later, a Justice Chandrachud-led bench also paved the way for granting permanent commission to women officers in Indian Navy, saying a level playing field ensures that women have the opportunity to overcome “histories of discrimination”.

He has been part of several constitution benches.

Justice Chandrachud was part of a five-judge constitution bench that on 9 November 2019 in a unanimous verdict cleared the way for the construction of a Ram Temple at the disputed site at Ayodhya, and directed the Centre to allot a five-acre plot to the Sunni Waqf Board for building a mosque.

He also wrote the lead judgement for a nine-judge Constitution bench in the Justice K S Puttaswamy versus Union of India case in which it was unanimously held that right to privacy constituted a fundamental right under the Constitution, reads the report.

Justice Chandrachud was a member of the five-judge constitution bench that unanimously decriminalised part of the 158-year-old colonial law under section 377 of Indian Penal Code, which criminalises consensual unnatural sex between consenting adults, saying it violated the rights to equality.

Another five-judge bench including Justice Chandrachud unanimously held that Section 497 of the Indian Penal Code, which criminalised adultery, was unconstitutional on the ground of being arbitrary, archaic and violative of the right to equality and privacy.

In a strong dissent, Justice Chandrachud differed with other members of a five-judge Constitution bench which by a majority verdict upheld the constitutional validity of the unique biometric identity number Aadhaar. He held Aadhaar to be unconstitutional and violative of fundamental rights.

He concurred with the majority verdict in the Sabarimala case in holding that the practice of prohibiting women of menstruating age from entering the Sabarimala temple was discriminatory and violative of women’s fundamental rights.

Besides, Justice Chandrachud was part of a landmark judgment by a five-judge Constitution bench which recognised ‘living will’ made by terminally-ill patients for passive euthanasia.

A bench headed by Justice Chandrachud ordered demolition of Supertech’s twin 40-storey towers in its Emerald project in Noida which were held illegal for violation of norms.

In November 2020, he headed a bench granting interim bail to journalist Arnab Goswami in a 2018 abetment to suicide case, saying it will be a “travesty of justice” if personal liberty is curtailed.

In July this year, a bench led by him ordered the release of Alt News co-founder Mohammad Zubair on interim bail in all the FIRs lodged in Uttar Pradesh against him for alleged hate speech, saying “exercise of the power of arrest must be pursued sparingly” and transferred all the cases in Uttar Pradesh to Delhi.

Justice Chandrachud was chief justice of the Allahabad High Court from 31 October 2013 till his elevation to the apex court.

He became judge of the Bombay High Court from 29 March 2000 until his appointment as the Chief Justice of Allahabad High Court.

He was designated senior advocate by the Bombay High Court in June 1998 and also became Additional Solicitor General in the same year.

He practised law at the Supreme Court and the Bombay High Court and was a visiting professor of comparative Constitutional law at the University of Mumbai. (PTI)