Joe Biden sworn in as 46th President of US, ends ‘Muslim travel ban’ 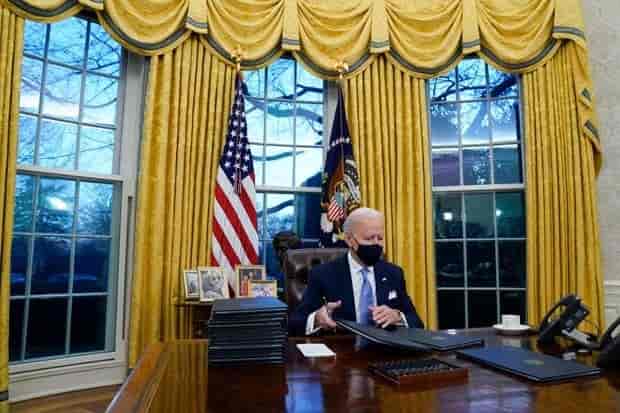 After being sworn in as 46th president of United States, Joe Biden on Wednesday ended the ‘Muslim travel ban’, which blocked travel to the United States from several predominantly Muslim and African countries.

Hours after taking the office, Biden on Wednesday signed 17 executive orders memorandums and proclamations including ending the Muslim travel ban.

He has directed the State Department to restart visa processing for individuals from the affected countries and to develop ways to address the harm caused to those who were prevented from coming to the United States because of the ban, The New York Times reported.

The ban faced several legal challenges, but the Supreme Court in 2018 upheld the final version of the measure.

With another executive order, Biden has bolstered the Deferred Action for Childhood Arrivals program that protects from deportation immigrants brought to the United States as children, often called Dreamers.

Another executive order revoked the Trump administration’s plan to exclude non-citizens from the census count, and another overturns a Trump executive order that pushed aggressive efforts to find and deport unauthorised immigrants.

Biden has also halted construction of Trump’s border wall with Mexico. The order includes an “immediate termination” of the national emergency declaration that allowed the Trump administration to redirect billions of dollars to the wall.