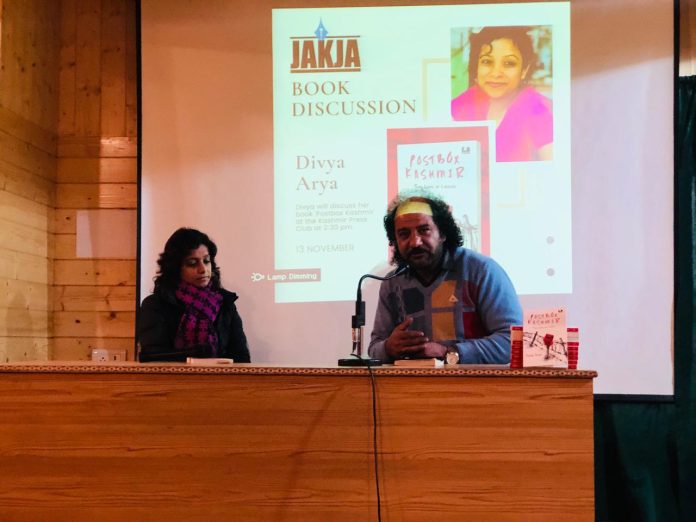 Divya is an award-winning journalist with the BBC reporting for its television, radio and web platforms in English and Hindi. She has focused her journalism on exploring human rights issues with a specific concentration on gender.

The book is about the challenging task of attempting to portray life in Kashmir from the perspective of the young minds growing inside it and providing a context of understanding for the young generation watching it from the outside. The story is told through letters exchanged by two pen pals, Saumya from Delhi and Duaa from Srinagar.

Divya while speaking in the session said that the aim of writing this book was to dispel prejudices that have developed over the years. “That is why I looked for a teenager in Kashmir to write to a teenager in Delhi so that both could understand each other’s lives and challenges by sharing their experiences in their own way,” she said.

She said that both girls chose the issues they wanted to write about. “Duaa wrote on stone pelting, shutdown, life of women in the conflict ridden valley and Saumya asked her about the calls for azaadi in the valley,” she said.

When asked about the initial conversation with Saumya and Duaa on this idea, she said, “I assured them that I would not tailor any part of the letters that they were writing and will present them in the original form. It is only because of this trust that the project came about.”

“I have not blamed anyone in the book whether its militants, government, separatists or other players involved in the Kashmir conflict. I have presented the facts as they are hoping it informs the readers to open their minds and build a better understanding,” she said.

BBC journalist Riyaz Masroor who is also the President of JAKJA presided over the conversion with the author at the session.

He said, “The scenes of the book have been captured by the author when some section of national media has been portraying the valley as the stone pelters’ place. But this book has told the story of Kashmir almost from all angles.”

Journalists and people from different walks of life attended the session.

In the end, journalist Aamir Peerzada presented a vote of thanks.