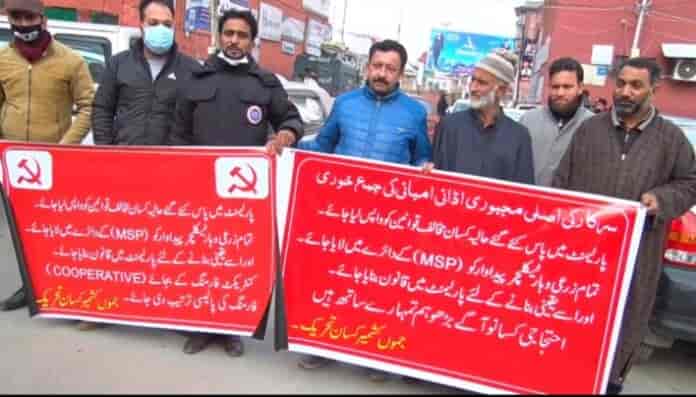 Srinagar: Jammu and Kashmir Kisan Tehreek on Monday staged a protest at Press Enclave Srinagar against the newly established farm laws. The members of Kisan Tehreek protested against the anti-farmer approach of the BJP led central government.

According to news agency KDC while protesting here in press Enclave they said, “We are protesting against the draconian laws passed by the Modi led govt. against farmers. These laws won’t do us anything better”.

The protest comes in support of already going on widespread protests by the farmers across the country.

The members alleged that these laws are totally anti-farmer and in no way would help a common farmer.  “The centre is only depicting its high-handedness by adopting such laws without caring for a common man.”

Hailing all the support to the farmers who are protesting against the anti-farmer bills, the protestors demanded that Govt should abolish recently adopted three laws and accept its “mistake”. Only withdrawal of these acts is the solution to our demand, they added.

Meanwhile large scale protests by farmers across the nation have entered third week, and talks between farmer leaders and Govt. officials have not yielded any results yet. The Centre keeps on accusing opposition parties for running propaganda against new farm laws. (KDC)