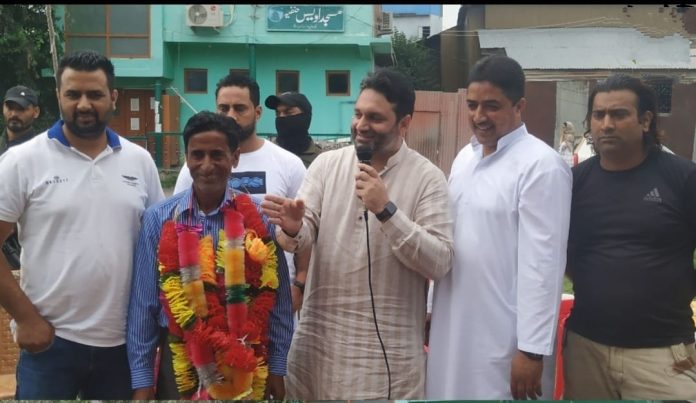 Former Deputy Mayor and political leader Sheikh Mohammad Imran on Friday said that people of J-K are facing enormous difficulties because of the “criminal political indifference” adopted by erstwhile successive governments that only focused on “exploitation of public trust and ignored the pressing issues of the general public”.

Imran was speaking at the sidelines of a public convention that was organised in Dalgate’s Khonakhan area near Masjid Owaisi (ra) where scores of local inhabitants took part and also discussed their pressing concerns with him.

“It is really painful to see that for 36 years, the innocent people of Khonakhan-Dalgate have given their sincere unrelenting support to the former MLA of Khanyar but in return they have to grapple with broken wooden bridges, failed drainage system, dilapidated roads, broken street lights and shambled condition of Shikara Ghats. Their trust has been sadistically violated and this vicious breach of trust can never be forgotten as people have overtly discarded this malicious family monopoly,” Imran said in a statement.

He assured the people to remain always available at their beck and call besides raising their concerns before the competent authorities in order to seek its prompt resolutions.

“I have taken oath to work for the betterment of my people and make Khanyar a model constituency which unfortunately has become a victim of family politicians who are visible among public circles during Election time only. My firm commitment with my people is to be on their side in all times, come what may and my efforts are directed to explore the ways by which the monthly income of every household in Khanyar increases considerably and I am hopeful that with this intent Almighty Allah will ease our task of rebuilding this constituency that has been a victim of negligence and nepotism,” the statement further read.

On this occasion senior National Conference leader Abdul Majid along from Khanyar with other active politicians joined Imran and pledged “to discard family politicians and contribute to usher in an era marked with tangible economic prosperity, better employment opportunities and improved public infrastructure”.

As per the statement, Imran was accompanied by numerous political leaders and activists who also addressed the general public on this occasion.

The people expressed their contentment over the deliberations made by Imran and vowed to support him unstintingly in the upcoming assembly elections, read the statement.