In UP, police denied returning body of gang-rape victim; cremated her late night 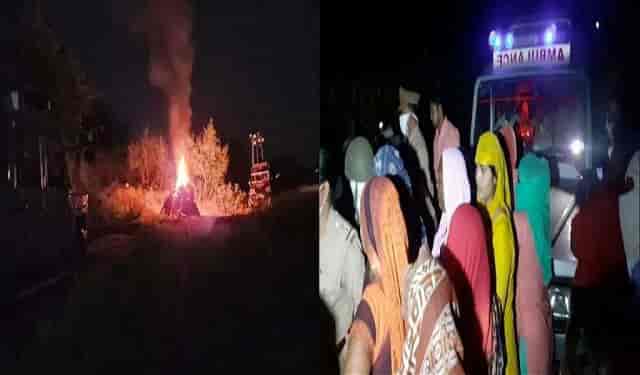 In Uttar Pradesh, the body of the 20-year-old Dalit woman, who died after she was gang-raped allegedly by four upper-caste men, was cremated by the police and district administration of Hathras district, her hometown, midnight against the wishes of the family, reported News18.

The woman’s family members told News18 that the police forcibly performed the last rites last night even though they wanted to bring her body home one last time and cremate her in the morning as per customs.

The woman had died at Delhi’s Safdarjung hospital on Tuesday, two weeks after she was attacked brutally while helping her mother in the fields. She had suffered multiple fractures, paralysis, and a gash in her tongue in the horrific assault.

But the family’s horror did not end there, as a high-handed police force whisked away her body from the hospital around midnight without informing the family. The parents and the brothers of the victim were in Delhi when the UP police brought her for cremation to Hathras, 200 km away from the national capital.

Bhuri Singh, the uncle of the deceased, said: “The parents and brothers of the victim were not present on the spot, they were in Delhi and did not even arrive by the time the body reached the village. When we asked not to perform the last rites at night and wait for the family, the police said that if you do not do it, we will do it ourselves.”

The police did not hand over the body to the family despite them asking to see her face for the last time. Videos showed the victim’s family pleading with police officials to let the body be brought home one last time, and the cremation be done in the morning.

At the village, there was also a clash between the police and angry villagers, and some relatives also tried to block the ambulance from going towards the cremation ground by throwing themselves in front of it, reported News18. But the police pushed the protesters away and cremated the victim around 3am in the absence of family members and without any customs. Videos and photos from the village showed a lone pyre, and no family members near it. Only cops were present, and they also kept media away.

The police has claimed that the cremation of the woman was carried out by the family members. Superintendent of Police (SP) Vikrant Veer denied any “urgency” by police in cremation despite the fact that cremation usually do not take place in night.

Prem Prakash Meena, the Joint Magistrate of Hathras, told news agency ANI, “The last rites of the victim have been performed. Police and administration will ensure that the perpetrators of the crime are brought to justice.”

All four attackers, upper caste men from the woman’s village, are in jail. They will now also be charged with murder. The UP police is under scrutiny over alleged lapses throughout the case, and the inexplicable rush in cremation has further added to anger and confusion in the village.

After the death of the victim, all the political parties fiercely targeted the government. The Bhim Army reached Safdarjung Hospital and started a sit-in demonstration. In many districts of the state, people took out a candle march in support of the victim and pleaded for justice.