In absence of road connectivity, villagers in Bandipora carry patient on cot to reach hospital 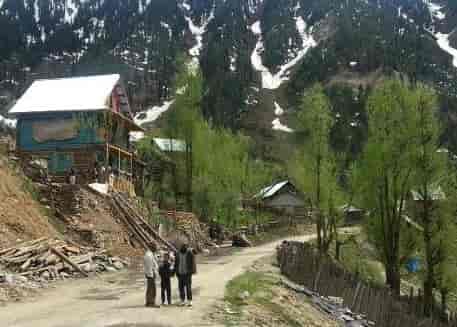 Srinagar: The villagers of Chandaji area in north Kashmir’s Bandipora district had to carry a patient on a cot and walk miles on foot to reach the nearest hospital due to lack of road connectivity for this far-flung village.

The villagers were compelled to carry a woman patient on a cot and walk miles on foot as they had no other option because of lack of road connectivity, reported wire-service KNO.

The villagers said that at around 6 am in the morning they left from the village carrying the patient on their shoulders and reached near Pazalpora at around 12 noon.

The village is located on the foothills of Tragbal forests in Bandipora and is located at a distance of around 15 kilometers from district headquarters.

Due to lack of road connectivity, the villagers have to walk on foot through hilly terrains to reach their respective destinations.

Locals said that the work on the road from Pazalpora to Chandaji was started in the year 2016 but it is still incomplete as the department left the construction work mid-way, thereby making people suffer immensely.

The village also doesn’t have any healthcare facility and they are forced to visit the district hospital which is around 15kms away from their village.

They said that they have to walk miles on foot to reach the hospital even for a minor ailment as the village doesn’t have any primary health centre.

“We have many times brought the issue into the notice of district administration but they have turned deaf ears to our repeated pleas. We have to suffer immensely. Neither the village has road connectivity nor is it a primary health center which has made the life of villagers miserable. Even during winter months, we have to walk on foot through snow and reach the district headquarters,” a villager Yasir Ahmad.

He said that the PMGSY department had started the work on the construction of the road in 2016 but left it mid-way.

“Last year they resumed the work on the road after we approached the higher officials but again they left it mid-way for reasons best known to them and till date the road is still incomplete,” he said.

Additional Deputy Commissioner Bandipora, Zahoor Ahmad Mir told that he will look into the matter and will also ask the Executive Engineer PMGSY why the work on the road has been halted. (KNO)