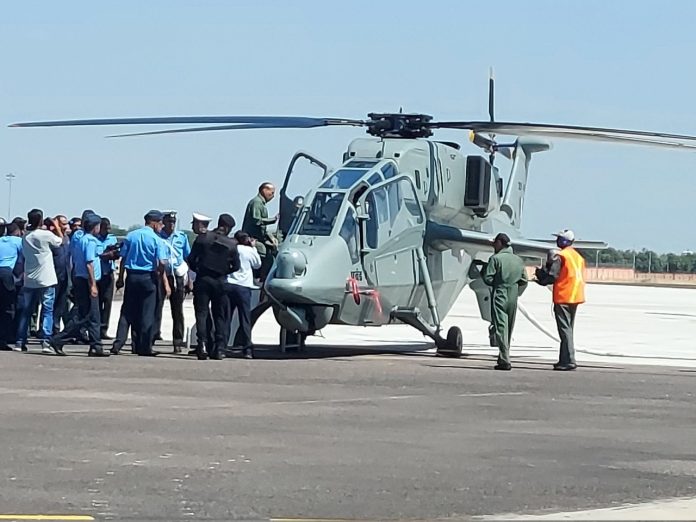 In a major boost to the Indian Air Force’s combat prowess, the first batch of indigenously-developed Light Combat Helicopter (LCH) will be inducted into the IAF inventory at a ceremony in Rajasthan’s Jodhpur today, reported ANI.

The indigenous choppers will be inducted into IAF in the presence of Defence Minister Rajnath Singh.

“The induction of these helicopters will be a big boost to the IAF’s combat prowess,” Defence Minister Rajnath Singh tweeted.

The new chopper getting inducted into the force is capable of aerial combat and will help the force combat slow-moving aircraft, drones and armoured columns during conflicts. The induction ceremony will be led by Rajnath Singh who has played a crucial role in progressing cases for buying indigenous platforms for forces, reads the report.

He was also present in the Cabinet Committee on Security which cleared the purchase of 15 of these LCHs for the air force and the army. Of the 15 limited series production helicopters approved, 10 are for the IAF and five for the army. It can land and take off from an altitude of 5,000 metres with weapons and fuel, the officials said.

As per the report by ANI, the choppers have been flown extensively in Ladakh and the desert sector to meet the requirements of the armed forces. The IAF has inducted multiple helicopters to its fleet in the last three-four years with the induction of the Chinooks, Apache attack helicopters and now the LCHs.

CCS met under the Chairmanship of Prime Minister Narendra Modi on 30 March 2022, in New Delhi. The CCS has approved the procurement of 15 Light Combat Helicopter (LCH) Limited Series Production at the cost of 3,887 crore rupees along with Infrastructure sanctions worth 377 crore rupees.

State-of-the-art technologies and systems compatible with stealth features such as reduced Visual, Aural, Radar and IR signatures and crashworthiness features for better survivability have been integrated in LCH for deployment in combat roles catering to emerging needs for the next 3 to 4 decades.

Under the Atmanirbhar Bharat Abhiyaan, India is continuously growing in its capability to indigenously design, develop and manufacture advanced cutting-edge technologies and systems in the Defence Sector, reads the report.

The manufacturing of LCH by HAL will give a further push to the Atmanirbhar Bharat initiative and boost the indigenisation of defence production and the defence industry in the country. LCH will reduce import dependence for the Combat helicopters in the country.

Light Combat Helicopters are already on the import embargo list. With its versatile features built-in for combat missions, LCH has the export capability. (ANI)