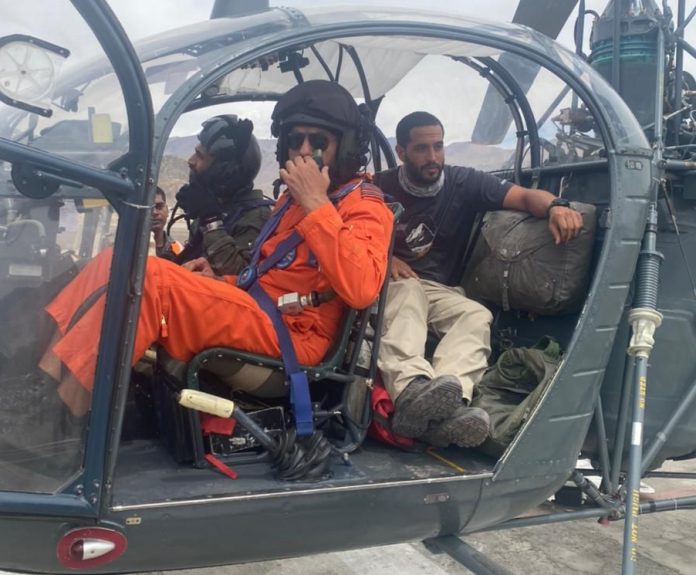 Indian Air Force on Saturday rescued an Israeli national from a high altitude area in Ladakh as he was suffering from acute mountain sickness and having difficulty in breathing.

In a statement, a Srinagar based spokesperson said that today 114 Helicopter unit received a call for Casevac (Casualty Evacuation) from Nimaling Camp near Markha valley.

The statement reads that Noam Gil, an Israeli national was suffering from acute mountain sickness and was having difficulty in breathing in the high altitude area.

“His oxygen level had dropped to 68%. In view of the severity of his condition, he had to be rescued from this valley which is known for severe turbulent conditions. Led by Wg Cdr Ashish Kapoor, Flt Cdr 114 Helicopter Unit, with Flt Lt Kushagra Singh and Wg Cdr S Badiyaree and Sqn Ldr S Nagpal as no 2, got airborne within 20 minutes for this critical mission,” it reads.

It added that braving strong winds and turbulent conditions, the formation reached to the spot in about 45 minutes, however, the casualty was in a steady move to lower altitudes.

“After a continuous search of 30 minutes the casualty was spotted at river gorge at valley bottom. The valley being very narrow there was difficulty in manoeuvring the aircraft. The formation leader led in for an approach on an unprepared surface on the valley bottom.”

It further said that with the assistance of number 2 holding overhead and proficiency of number 1, the landing was carried out in one of the most restricted spaces ever landed in this particular valley.

“The casualty was emplaned at low hover and the formation got airborne immediately. Being on less fuel, the formation routed back via standby route, braving all the difficulties the formation finally landed at Leh,” it added. (KNO)