The Kashmir Walla
Support Us
In-DepthPolitics

How L-G Manoj Sinha has been instrumental in J-K for New Delhi? 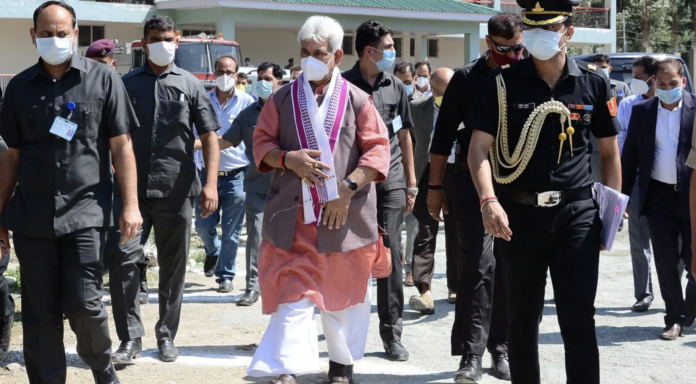 On 15 August, as the government in Jammu and Kashmir marked the independence day, the newly appointed Lieutenant Governor (LG), Manoj Sinha, said that a new era of normalcy and development has dawned upon Kashmir.

“We are committed to providing a better alternative for the people of Jammu and Kashmir,” he said in the event. “An alternative that stands for development, welfare, and social transformation.” It is for this purpose that New Delhi had sent Sinha in August 2020 after two last governors – G. C. Murmu and Satya Pal Malik, who both couldn’t connect with the issues in the region.

It had just been a year since articles 370 and 35A were revoked and the erstwhile state was broken down into two union territories: J-K and Ladakh. However, the larger issue at hand was the suffocating political space. Many prominent unionists had spent months under detention while a few of their companions were still barred from the movement. New Delhi had to reach out to people and end the political stalemate.

Now, a federally-governed territory, anything that happens in J-K comes at New Delhi’s door. With this obvious realisation, saying that the Centre’s choice of choosing a new governor for J-K has been very wise, and well-thought, won’t be an overstatement.

Before August 2019, Malik’s term as governor of the erstwhile state was comical. From his foot in mouth statements to his meddling into affairs that didn’t concern him, Malik proved to be far from how an administration is run. It was his term that produced hundreds of memes and jokes on the office of governor and gave it a troubled history, growing distrust among the unionists, and especially with Malik having taken over after dissolving the assembly. He turned to be a non-serious administrator, which New Delhi couldn’t have afforded in the post-August 2019 situation.

Thus was brought Murmu, who was sworn in as the first L-G of J-K (as a union territory), reportedly to streamline many issues in bureaucracy. But in his tenure, neither the political process restarted nor the bureaucracy was shaped into anything refreshing. It was during his time only, in last February, that the government also postponed the scheduled Panchayat polls, citing the law and order situation in J-K. Following all this, Murmu’s short tenure, filled with controversies, led to his resignation ahead of his term as the L-G.

An Indian Administrative Service (IAS) officer of the 1985 batch, Murmu was a bureaucrat in his functioning and not political which led to an absence of any political activities. As a bureaucrat himself, Murmu had many points of difference from other senior bureaucrats in the administration. Missing collective responsibility the administration was divided into lobbies under his tenure. To get J-K back on track, as per its plans, New Delhi brought in Sinha.

Sinha was an unknown face to people in J-K. But back at his own state, with a low-key and clean image, in north India’s Uttar Pradesh, he was the top candidate for chief minister in the 2017 assembly election. He was also elected to Lok Sabha in 1996, 1999, and 2014 elections. Even though a loss in 2019 Lok Sabha from Ghazipur didn’t deter him. “Had he not lost the polls, his elevation as one of the top five cabinet ministers was certain. There was no doubt about it,” a party leader told The Print.

Born in the eastern region of Uttar Pradesh, Sinha began his political career as a student leader from the Banaras Hindu University Students Union in 1982. Soon, he joined the BJP and grew close with then another worker — who went on to become the Prime Minister, Narendra Modi. For the 2014 and 2019 Lok Sabha elections, Sinha was also party in-charge of PM’s Varanasi constituency.

At the beginning of Sinha’s tenure, the litmus test was the alleged human rights violation cases in Kashmir by the government forces: a 26-year-old resident of Sopore, Irfan Dar, was picked up from his shop, allegedly by the government forces, and was later killed in custody on 16 September; three civilians from Rajouri were killed by the army in a “staged gunfight” in Shopian on 18 July.

Sinha took cognisance of the cases officially and ordered a magisterial probe in the killing of the Sopore youth whilst two separate inquiries are underway in Shopian fake gunfight case. But more importantly, he is reported to have briefed the top-brass of the government forces to “not let [forces’ personnel] take law in their hands”.

“Such actions were taken to deter trigger happy cops and jawans against unplanned, rash action in anti-terror operations,” an official, privy to the development, told a newspaper. The report added that the LG-led administration believes that a civilian uprising due to military high-handedness can also derail its development plan for J-K.

“To make policing more effective, the necessary reforms are being undertaken,” said Sinha in an event.

After this, Sinha traveled to Rajouri to visit the families of the trio killed in Shopian and assured the families of justice. Maintaining a connection with the people, he also visited Babar Qadri, an advocate and human rights activist, who was shot dead by unknown gunmen in Srinagar. His approach has been to meet people – which his team evidently highlights on his social media too, where photos of his meetings with various delegations and politicians.

On the developmental front, he has also taken a couple of progressive options, perhaps trying to make people in J-K realise the “alternative option” of governance that the Centre pushes. Like, a package of 1,350 crore rupees to help the tourism and business sector; earmarked 170 crore rupees to Shikara owners, transporters, and performing artists, who have not been able to earn their livings post 5 August 2019 shutdown and then the COVID-19 lockdown, which was done after a delegation representing these communities met him; gave assistance of Rs 5,000 for insurance of heavy motor vehicles, Rs 2,000 for taxis and Rs 2,000 for three-wheelers, wherein an amount of Rs 50 crore was earmarked for this.

In Sinha’s term, as political workers were killed, he assured: “Some measures to protect panchayat representatives and political workers have already been taken but we will ensure better security arrangements.” He also offered militants to surrender and promised to help them with jobs and other entrepreneurial opportunities when he spoke on the occasion of the “Back to Village” program in South Kashmir’s Shopian.

Sinha’s stint in Jammu and Kashmir, as the first politician to serve as L-G, will be recalled irrespective of on what note it ends. If New Delhi is serious with its corruption-free J-K and strong governance, then Sinha is the man they have trusted to deliver. However, his administration still has a number of issues at their hands, where he would face multiple challenges. Jammu and Kashmir is going through one of the worst economic crises; militant recruitment hasn’t gone down — but is second-highest in the last decade; and majorly, the DDC polls that restarts electoral politics in J-K. It will be a long road home for him.

What’s your constituency?: All we know about J-K’s final delimitation plan