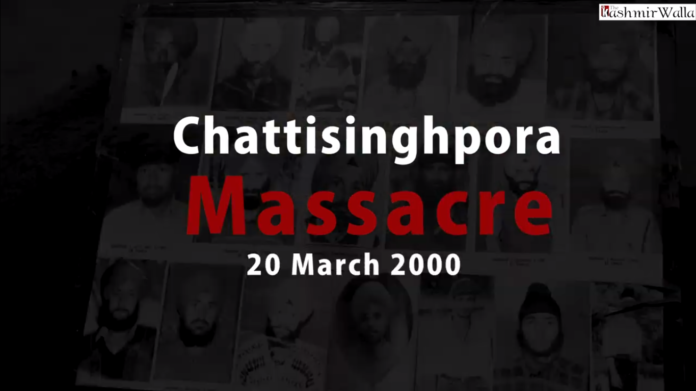 Srinagar: On twenty-first anniversary of Chattisingpora massacre the APSCC Chairman Jagmohan Singh Raina has  demanded a fresh probe into the killings.

After 21 years  the people of Jammu and Kashmir especially the Sikhs of the valley are still waiting for the justice and urge the state and central government to nab the culprits of Chattisinghpora  massacre.

In a statement issued here on Saturday on yet another anniversary of Chattisinghpora massacre, the APSCC Chairman Jagmohan SinghRaina urged the government to  announce a fresh probe into the incident and allow the Justice Pandian Commission to further investigate the incident as Brakpora and Chattisinghpora  cases are interlinked. He also urged the people of Jammu and Kashmir to get united for communal harmony and solve their long pending issues.

Jagmohan Singh Raina in his statement reminded that In the year  2000, unidentified gunmen had entered a quiet Kashmiri village in South Kashmir’s Anantnag district and massacred 35 men, adding that the  men who were killed belonged to the minority Sikh community and their murder shocked the entire Kashmir.

He regretted that though the Central Government has blamed militants for carrying out the massacre but it’s  claim that  at least five of the men who carried out the brutal massacre  is yet to be proved by hard evidence and as such  the questions still remain unanswered.

APSCC in it’s above referred statement said that the slain people dubbed ‘militants’ by police  were actually innocent residents of Brackpora proved by judicial enquiry of Justice Pandan Commission. The APSCC also said  bodies of slain men  were burnt and hastily buried in a nearby village. “The drama stage managed by the officials was a fake asthey said that the militants were caught in a burning house during a gun battle and their bodies were charred beyond recognition” said APSCC .

Stating that people  in Kashmir are questioning whether the men killed on that day were actually involved in the Chattisinghpora killings or not, APSCC in its statement further said that so far the police have failed to produce any hard evidence that the slain men  were involved — leaving many people in Kashmir doubt that whether the security officials in the troubled region really knew who killed the men of Chattisinghpora.

The APSCC also said that do far the Committee appointed by the Government has failed  to find out the culprits and  solve the mystery of killings of Sikhs in Kashmir. The APSCC has both the central government and as well as Jammu and Kashmir Government   to order a fresh probe in the killings failing which Sikhs  will consider it as a huge injustice done with them.

Recalling that furing the time of the massacre the then  US President Bill Clinton also expressed his grief on the sad incident and urged the Government of India to nab the culprits, which he later on also mentioned in his book and termed the incident as  most unfortunate incident of his life.

The APSCC also reminded that after the killing of innocent Sikhs, the then Jammu and Kashmir Chief Minister Dr Farooq Abdullah publicly assured that the culprits will be soon arrested as they were having some clue and assured all the assistance needed by the Sikhs of Kashmir. but till date the promises made by the former CM have not been kept.

On this fateful day, All Parties Sikh Coordination Committee, even after two decade, urge the government to conduct fresh probe in the killings so that culprits are nabbed and justice is provided to the families of the victims.

On yet another anniversary ofChattisinghpora massacre, the Jagmohan Singh Raina chairman APSCC urged the government to order a fresh probe into the incident and allow the Justice Pandan Commission to further investigate the incident as Brackpura and Chattisinghpora  case are interlinked. He also urged the people of Jammu and Kashmir to be united for protecting communal harmony and resolving  their long pending issues.(KNS)