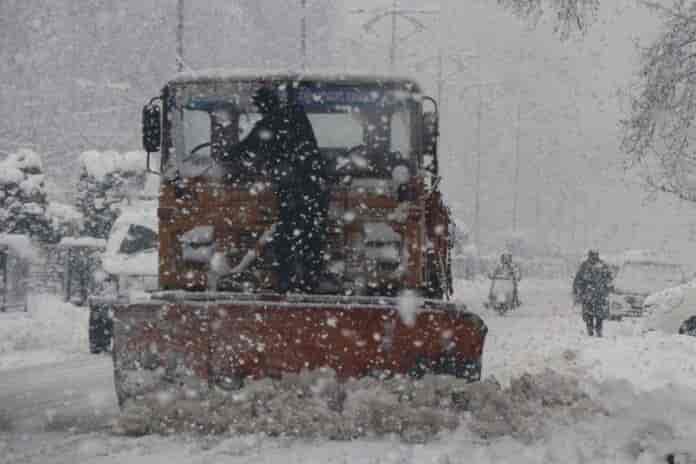 Srinagar : Snowfall continued in Kashmir Valley for fourth consecutive day on Wednesday. Flight operations to and fro Kashmir remained suspended while Jammu-Srinagar highway remained closed due to mudslide and landslides at several other places en-route the thoroughfare besides snowfall in and around Jawahar Tunnel where close to four feet of snow has been recorded.

Officials said that the work is underway to clear highway, the only surface link connecting Kashmir with the outside world.

Regarding the air traffic, officials told that at least eight flights have been already cancelled.

Due to snowfall, the official said that all flights were cancelled on 3rd, 4th and 5th January. “The concerned AAI executives have been working very hard in coordination with Beacon staff and continuously monitoring the area to avoid snow accumulation in apron area, keeping in view that stranded passengers may reach to their destination.”

Meanwhile, normal life remained standstill in Kashmir Valley even as there are reports of snowfall causing damage to a few more structures in the Valley. Most lanes are still impassable for driving across the Valley while main roads are being cleared, reports said. Snow clearance machine have been pressed to clear main roads, they said.

A MeT official here told that Srinagar received 34.7cm of snowfall in the last 24 hours till 0830 hours while Qazigund, the gateway town of Kashmir, recorded 33.7cm during the time.

The heavy snowfall also caused power disruptions and as per official figures revealed during a meeting chaired by advisor to LG Baseer Ahmad Khan through video conference last evening, at least 223 feeders are still to be restored apart from several 33KV and 11KV lines. A few community transformers have also been damaged.

The snowfall has also led to severe disruptions in milk and vegetable supplies to parts of Srinagar and elsewhere.

Kashmir is in the middle Chillai-Kalan, the 40-day winter period which commenced on 21 December 21 and ends on 31 January . The period is considered the harshest of the winter when the chances of snowfall are most frequent and maximum.

The cold wave, however, continues even after that in Kashmir with a 20-day-long ‘Chillai-Khurd’ (small cold) and a 10-day-long ‘Chillai-Bachha’ (baby cold).
The weatherman has forecast more snowfall in the next 24 hours and a “significant” improvement in from 6 January.

The Weatherman has forecast a significant improvement in the weather conditions from this afternoon.
“Weather is improving gradually, significant improvement is expected from today afternoon onwards but light rain/snow will occur at scattered places of Jammu and Kashmir for next 24 hours,” Director Meteorological department Sonam Lotus said. “For now, there is no forecast of any major snowfall,” he said, adding, “From tomorrow, weather is likely to remain mainly dry.” (GNS)