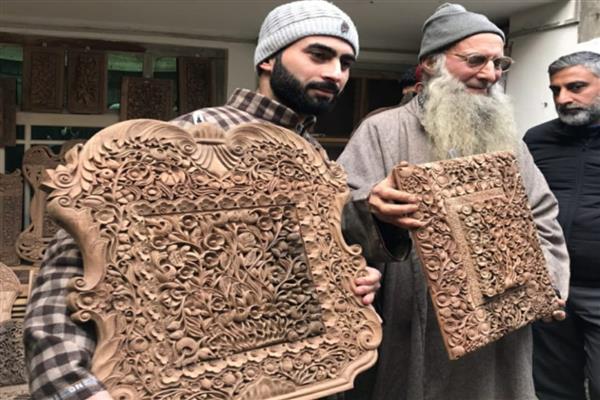 Srinagar: After the nomination of the Srinagar as a part of UNESCO creative cities network, the Department of Handicrafts & Handloom Kashmir today launched its first craft safari from the Safakadal area of the down town Srinagar.

The safari started from the Karkhana of Ali Mohohammad Najar, a national awardee in the Khatamband craft where the audience was mesmerized by the geometrical masterpieces that were handmade from the walnut wood.

While narrating the story of his craft the master artisan narrated that his forefathers had moved to Safa Kadal from Tral on the orders of then Maharaja and the family has been associated with the craft of Khatamband from a long time now and hence named their enterprise qadeem meaning ancient.

The group then moved to see the magic of crewel craft at Naqash famously known by the name of Khursheed Naqash & Sons. Naqash was established in 2008 in the Safakadal area of Srinagar. Famous for the crewel embroidery and designs ,the venture has its genesis in more than two hundred years of history from Turkmenistan when Khursheed Ahmad Naqashs forefathers migrated to Kashmir.

The safari continued to throw further surprises at the work place of Ghulam Nabi Dar where the delicately hand carved motifs turned out to be a treat for eyes. Ghulam Nabi Dar,the master artisan in the wood carving craft is the epitome of creativity and passion. He has been creating intricate designs and life size pieces for over 60 years and still tries to bring novelty to his artifacts.

The group than saw the Pashmina weaving in the kharkhana of Mohammad Lateef Shah, staple embroidery in the kharkhana of Feroz Ahmad Bhat and at last the carpet weaving by SS Carpets of Gul Mohammad Sofi who has revived the Mughal technique of weaving single –Knotted carpets and is known for his one of a kind 3D designs in carpets.

Director Handicrafts & Handloom Kashmir thanked the master artisans, participants for joining the inaugural event of Srinagar Craft Safari that would from now onwards be a regular feature. (KNS)