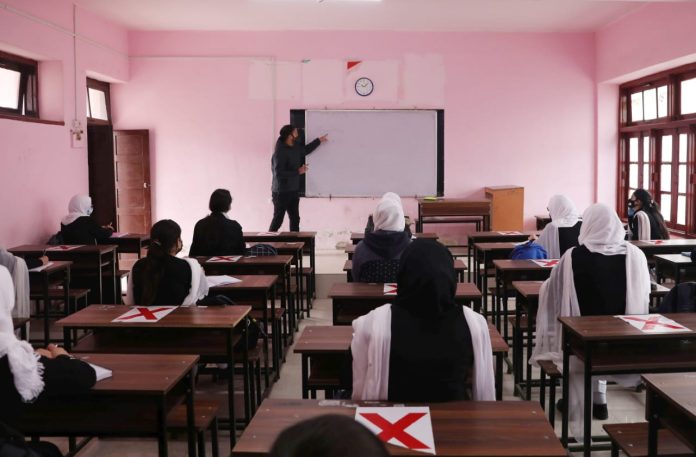 Students and teachers from a government-recognized private school located in old Srinagar city Monday staged a protest for sealing the school despite securing “court orders” against such action.

For the last three years, the Jammu and Kashmir government has closed over 125 private schools for one or the other reasons.

“Government sealed our Naqshband Public High School on 19 October. We are being deprived of getting the education and are sitting at home,” the protesting students said.

Teachers of the school said that the court directed the authorities to de-seal the school, however, it was sealed again, “much against the wishes of the locals.”

‘The school management has been paying rent to the owner of the land,’ they said.

The land belongs to ‘Arya Samaj’ on which the school is functioning for many decades.

Tehsildar Khanyar in his directions to the police has stated that the structure of Arya Samaj that has been found under the “occupation of Naqshband Public High School” has been sealed and the police are directed to ensure that the seal is not broken.

Private Schools Association J-K has already moved to court questioning the undue interference of the government in the education sector and the closure of over 125 private schools in Kashmir Valley. (KNT)

Previous articleCRPF commandant held for sexually harassing woman officer in Jammu, gets bail
Next articleTeenage girl hangs self to death in north Kashmir