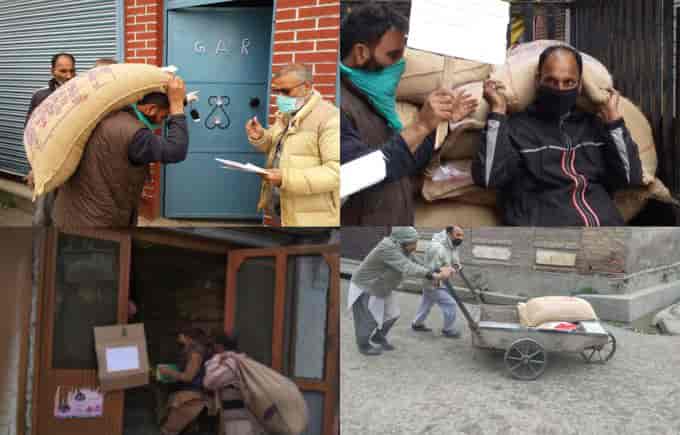 Srinagar: Some 90 thousand households have been delivered foodgrains at their doorsteps in Srinagar since distribution of PDS ration was started last week in the district.

Distribution has been completed in 22 zones and is in progress in the remaining 12 zones where it was started Saturday and will be completed on Tuesday.

In the 22 zones – including 6 and 16 where distribution was taken up first and second – some 80 thousand households were home-delivered foodgrains. The details of foodgrains include over 60 thousand quintals of rice and over 2500 quintals of wheat.

In the remaining 12 zones where distribution is in progress right now some 10 thousand households have been home-delivered foodgrains in two days.

The total amount of foodgrains distributed amongst 90000-odd households as has been done so far include around 71 thousand quintals — including some 68000 quintals of rice and over 3000 quintals of wheat.

Besides foodgrains the administration is also distributing LPG refills amongst residents across the district.

So far since March 28 when distribution was started after imposition of restrictions some 50 thousand households in areas across the district have been delivered LPG refills at their doorsteps.

Hindustan Petroleum with a larger customer base than both Indian Oil and Bharat Petroleum has made bulk of these deliveries. It should be noted that the roster as per which these companies are distributing LPG refills amongst their consumers will continue until restrictions as enforced in the district remain.

It is notable that residents of the district are being provided both foodgrains and LPG refills at their doorsteps in view of restrictions on public movement put in place in the district in an effort to contain spread of the COVID-19 disease.

Deputy Commissioner Srinagar Dr Shahid Iqbal Choudhary said the distribution of foodgrains and LPG is being made as per a comprehensive plan to ensure each of over 2.6 lakh households gets its quota of both without having to move out of their homes.

He urged residents to stay home whilst they must and rest assured that both foodgrains and LPG will be delivered to them at their doorsteps. He said that a second round of foodgrains distribution will be made wherever required in the district in order to cover those who might have missed this round.

It is notable that the Srinagar administration has also put in place a mechanism under which residents without ration cards can also get foodgrains and at their doorsteps.

Sajad Qadri who has been appointed as Officer on Special Duty at DC Office Srinagar to assist the DC with COVID-19 related efforts and has been designated as nodal officer for public distribution of essential commodities in the district said that non-ration card holders can contact dedicated helplines at 9018249426 and 8825010324 to place their demands for foodgrains — adding that callers can rest assured that they will get them as ordered.