Family of Srinagar youth arrested by NIA seek his release 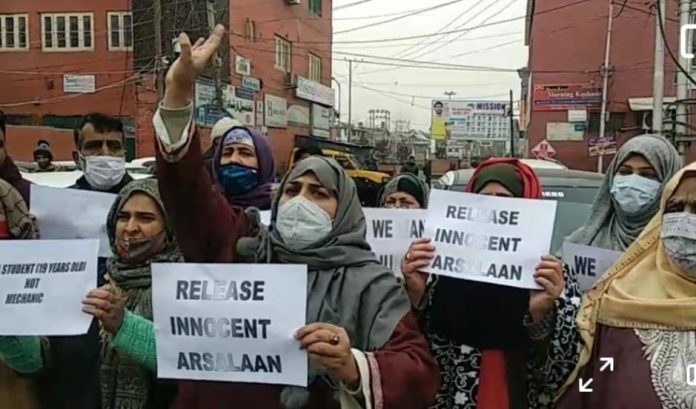 Srinagar: Family members and relatives seek the release of a Srinagar youth who is currently in NIA custody.

Family members and relatives of Arsalan Feroz-an 18-year-old youth from Zaldagar Srinagar emerged in Press Enclave Srinagar and said that Arsalan was arrested by National Investigation Agency (NIA) after a raid.

One of the aunts of the arrested youth told news agency Kashmir News Trust that a team of NIA raided the Zaldagar house of Arsalan in his absence.

“NIA found nothing suspicious and later ordered us to call Arsalan. We produced Arsalan before the police and yesterday we were shocked after learning about a statement from NIA that Arsalan is a TRF operative,” she said.

Pertinently, NIA, day before yesterday issued a statement claiming that it has arrested a TRF/LeT operative.

“He is a 12th class student and we produced him before police ourselves. Earlier he had been arrested but was released after police found him innocent,” they said.

The family members appealed to LG and DGP to intervene and get Arsalan released. (KNT)