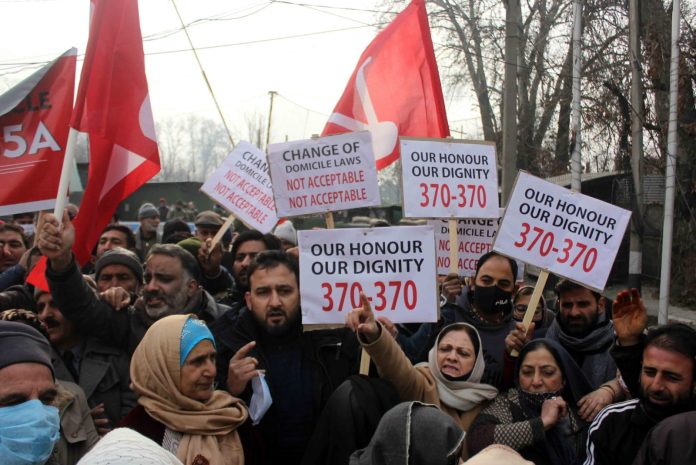 Srinagar: Even after placing PAGD leaders under house arrest, National Conference and PDP workers and leaders staged a protest against the Delimitation Commission in Kashmir capital Srinagar.

National Conference workers and leaders including former Speaker Mubarak Gul and Shameema Firdous assembled at National Conference Headquarters at Nawai Subah Srinagar and started a march through the interiors of Jehulm Bund that passed through All India Radio Srinagar road amid sloganeering against the Delimitation Commission.

The protesting party leaders and workers alleged that under a well planned conspiracy the voice of people of Kashmir especially PAGD leaders are being stifled. They castigated the government for placing PAGD leaders especially Dr Farooq Abdullah and Omar Abdullah under house arrest.

While talking to reporters National Conference leader Mubarak Gul said that it is very unfortunate that PAGD leaders were placed under house arrest and disallowed to carry out a peaceful protest. He said staging protests is a democratic right but the government in Jammu and Kashmir doesn’t like democratic activities and muzzles the voices of the people.

He said they reject the proposed draft of the Delimitation Commission and won’t accept it.

PDP workers and leaders led by Muhammad Yasin Bhat and Rouf Bhat assembled on Jehlum Bund and marched towards road. Police tried to stop them but the workers continued to raise slogans.

Bhat said that ‘hooliganism’ in Kashmir should be stopped and people should be allowed to breathe freely. “This muscle power won’t work and we will continue to raise our voice against the policies and measures which are anti-which are anti-people in nature,” he said.

Previous articleFamily of Srinagar youth arrested by NIA seek his release
Next articleIndia has 1,431 cases of Omicron