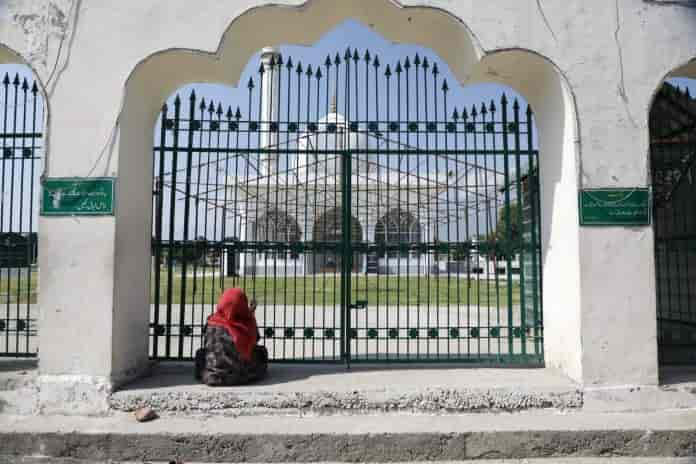 Srinagar: Azi Begum was waiting outside the Hazratbal Shrine for the sixth consecutive Friday as she was not allowed to enter the premises by security guards.

Some of the mosques and shrines in Srinagar city have been closed for Friday congregational prayers since August when an advisory was issued by the authorities that allowed only 25 people  to gather for any indoor or outdoor event, including religious gatherings too.

This order has left many like Begum in distress, who are regular visitors to the shrines. She has been a strong devotee of Asaar-e-Sharif Hazratbal for decades.

Despite the closure, she still pays a visit to the shrine, travelling a distance of 25 kilometers in hope of offering Friday prayers. But every week she returns home disheartened.

“I visit the shrine every Friday and wait for the gates to open but they do not,” she said. “Why has the administration closed the doors of mosques when people are allowed to attend jam packed weddings? Do they not spread the Coronavirus? Why would praying in mosques be a matter of concern only?”

Friday prayers have not been allowed for the sixth consecutive week in Jamia Masjid Nowhatta also. On 6 August this year Friday Congregational prayers were allowed at Srinagar’s historic Jamia Masjid after a gap of  16 months since the outbreak of the pandemic amid stringent security arrangements. Later, the ban was imposed again.

However, the ban on Friday prayers at some of the major mosques and shrines in the city coincides with the government order of opening public parks for the visitors.

The Deputy Commissioner Srinagar in July this year had substantiated his decision of opening public parks by saying that “significant improvement has been observed in the daily/weekly positivity rate in district Srinagar since past few weeks.”

The statement had added that it has led to a sharp rise in public outrage as such dictatorial measures have severely hurt the religious sentiments of the people who have been prevented from performing their religious duties.

In May this year, Jammu and Kashmir Waqf Board announced suspension of regular prayers for time being at the mosques and shrines affiliated to it in Kashmir as a preventive measure. But the board sees government’s continuous ban as unwarranted and undue. It has been demanding permission to offer Friday congregational  prayers at all mosques and shrines.

“We met the Divisional Commissioner Kashmir on Saturday and put forward our concerns regarding the barring of Friday prayers and asked him to permit Friday prayers at the masjids,” Mohamad Fakhr u Din, Chief Executive Officer of the Wakf Board, told The Kashmir Walla.

He added that “we realize the looming threat of the third wave of the pandemic but if people follow the COVID appropriate behavior, there would be no harm in allowing people to practice their beliefs.”

Since the death of Hurriyat veteran Syed Ali Shah Geelani , congregational Friday prayers at the Jamia Masjid Hyderpora have also been barred for the third consecutive week.