Devastating floods kill over 100 people in Germany and Belgium 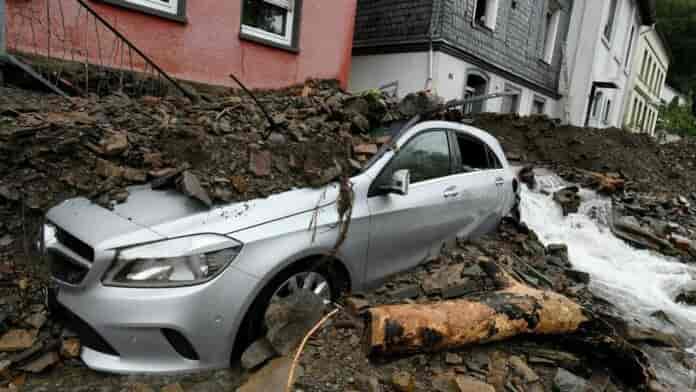 According to Al-Jazeera the death toll from devastating floods across parts of western Germany has risen to 93,

The total toll of flooding in Western Europe crossed 100, as the search continued for hundreds of people still unaccounted for.

Authorities in the German state of Rhineland-Palatinate said scores of people had died there, including at least nine residents of an assisted living facility for people with disabilities.

In neighbouring North Rhine-Westphalia state officials put the death toll at dozens, and warned that the figure could rise further. About 1,300 people were still reported missing, though authorities said efforts to contact them could be hampered by disrupted roads and phone connections.

In a provisional tally, the Belgian death toll has risen to 12, with 5 people still missing, local authorities and media report early on Friday.

German Chancellor Angela Merkel, on a visit to Washington, DC, voiced her shock at the scope of the flooding, saying “I grieve for those who have lost their lives in this disaster”. She said the number of dead was likely to rise further. “We still don’t know the number. But it will be many.”

Speaking at the White House, Merkel said the day was “characterised by fear, by despair, by suffering, and hundreds of thousands of people all of a sudden were faced with catastrophe”.

“My heart goes out to all of those who in this catastrophe lost their loved ones, or who are still worrying about the fate of people still missing,” she said.

Dozens of people had to be rescued from the roofs of their homes with inflatable boats and helicopters. Hundreds of soldiers were deployed to assist in the rescue efforts.