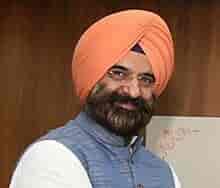 A Srinagar Court has directed the SHO Sadder to file status report by 12th of this month to a petition filed by a student activist seeking FIR against Majinder Singh Sirsa and BJP JK president Ravidner Raina.

The Chief Judicial Magistrate Srinagar according to a local news agency, Kashmir Dot Com (KDC) has directed the SHO Saddar Srinagar to file status report failing which action under law shall be initiated against the SHO concerned.