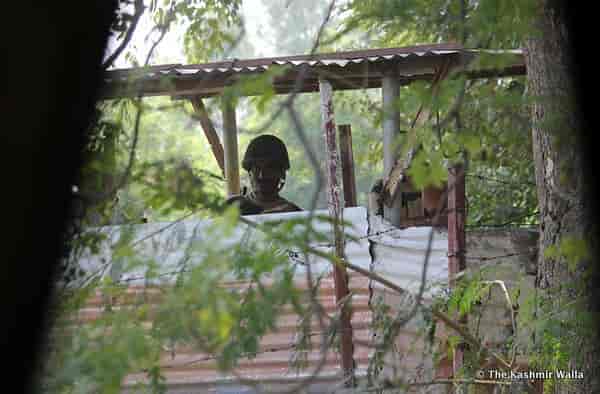 Baramulla: The government forces have recovered a Chinese-made M-16 assault rifle from the three militants killed Thursday during an anti-infiltration operation along the Line of Control in Uri, with the Army describing the recovery as “unusual”, reported Press Trust of India.

The army said two AK series weapons, one Chinese M-16 weapon, and ammunition were recovered from the Pakistani militants killed in the Kamalkote area of Uri while trying to infiltrate the Indian side.

“Usually, we find AK series and at times, the M-4 rifles being recovered. This M-16 is a Chinese-made 9-mm caliber weapon. This is an unusual recovery,” General Officer Commanding (GoC) of the Army’s 19 Infantry Division Major General Ajay Chandpuri told reporters in Baramulla in north Kashmir.

He, however, said it would be premature to say if this hints at a probable nexus between the Pakistani Army, militants, and the Chinese Army.

“It would be too premature to speculate on the larger context of it. So, I think, we will have to really examine and go into the details,” he said.

On the number of militants on the launchpads across the LoC, Maj Gen Chandpuri said based on multiple inputs “there were close to 100-120 terrorists attempting to infiltrate and present in 15-20 launchpads which are close to the LoC”, opposite this sector alone.

“So, while the ceasefire understanding is largely holding good for the benefit of the people on both sides, the presence of militants on the launchpads and their continuous attempts to infiltrate are on,” he added.

The GoC said, “Pakistan is desperate and frustrated, and will continue to try to infiltrate militants and send in arms and ammunition despite a robust anti-infiltration grid in place.”

“The LoC is over 740 km which includes very difficult terrain and then there were spells of inclement weather. So, despite the vigilance, there are gaps from where they try and infiltrate militants and war-like stores,” he said.

However, he said, with each passing day, the level of technology and alertness is improving.

“So, the infiltration has come down significantly, which is also indicated by the peace in the hinterland. So, we feel they are getting more and more desperate to push these people in any way possible. This one attempt made early in the morning is indicative of their desperation and their frustration,” he said.

He said the swift elimination of militants sends a clear signal of the level of preparedness of troops on the LoC.

Asked if there were any attempts to drop weapons using drones in the sector, the GoC said: “not really”.

“But, we are watching out for that and prepared to deal with it.

Previous articleJustice UU Lalit sworn in as 49th Chief Justice of India
Next articleStrengthen BJP in Kashmir, not just in Jammu: Amit Shah