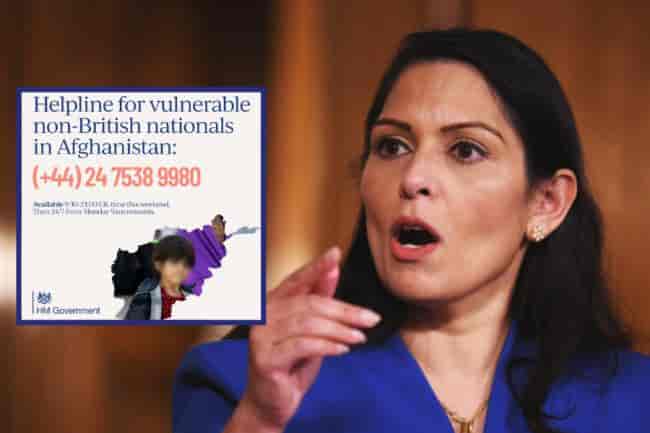 The Home Office of the UK Government has blamed a “technical glitch” after callers to an emergency Afghanistan helpline were redirected to a washing machine repair company in Coventry, The National reported.

British Home Secretary Priti Patel’s department was inundated with complaints as people were left on hold for hours or unable to get through at all.

One caller in Scotland – who was phoning on behalf of their family in Afghanistan – also complained that instead of speaking to a UK Government official they had been put through to a washing machine repair firm.

That prompted a demand for action from the person’s constituency MP, the SNP’s Chris Law.

The helpline, which was launched by the Home Office last week, is for “vulnerable” non-British nationals in Afghanistan.

The Home Office acknowledged that some calls had mistakenly been redirected to a washing machine repair business but insisted the “technical glitch” had been resolved “swiftly”.

The service was launched last week as the Taliban swept to power following the withdrawal of western forces – sparking fears of brutal reprisals for anyone not considered to be sympathetic to the new regime.

But the Home Office urged anxious callers not to dial in repeatedly to “chase” officials for information, claiming that was the reason for some delays.

A Government spokesperson said: “The new Afghanistan Helpline is up and running and dedicated Home Office civil servants have taken the details of more than 20,000 people.

“We would urge people to not call the line to chase for updates as this is causing further delays.”

The Home Office insisted over the weekend that the helpline would be open 24-hours a day as of Monday, having initially been open from 9.30 am to 11 pm UK time. But many callers complained on social media on Monday that the lines were still shut after 11 pm.

National Conference chief Farooq Abdullah on Monday said that People's Alliance of Gupkar Declaration will contest elections together in...
Kashmir