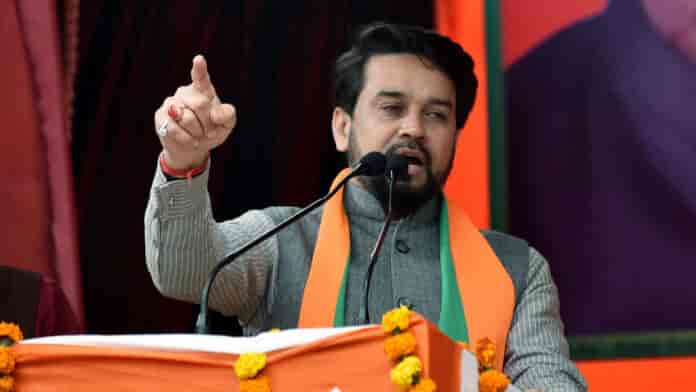 After deputing its ‘Bihar Man’ and party general Secretary Bhupendra Yadav as its pointsman for the Greater Hyderabad Municipal Election, the BJP has deputed Minister of State for Finance, Anurag Thakur to win it the forthcoming Jammu and Kashmir local body polls, reported IANS.

An order signed by BJP’s Arun Singh on Sunday said that BJP chief J.P. Nadda himself made the appointment and it comes into effect immediately.

Earlier, during the election campaign in New Delhi for the BJP, he had made controversial remarks and onvoked the slogan: “Desh ke gaddaron ko, goli maaro saalon ko (shoot the traitors of our country).” His remarks were associated with the citizens opposing the Citizenship Amendment Act. After he made the statement, Mr. Thakur clapped his hands and urged the crowd to chant the slogan along with him.

The voting for the District Development Council (DDC) elections in Jammu and Kashmir will be held in 8 phases from 28 November to 22 December.

Earlier, the BJP won the local body elections in Ladakh, that it advertised as an endorsement of the Centre’s abrogations of Article 370 and splitting the erstwhile state into two Union Territories.

The J-K local body elections assume significance as this will be the first electoral move ever since last year’s decision to abrogate the Article that gave special powers to the erstwhile Jammu and Kashmir.