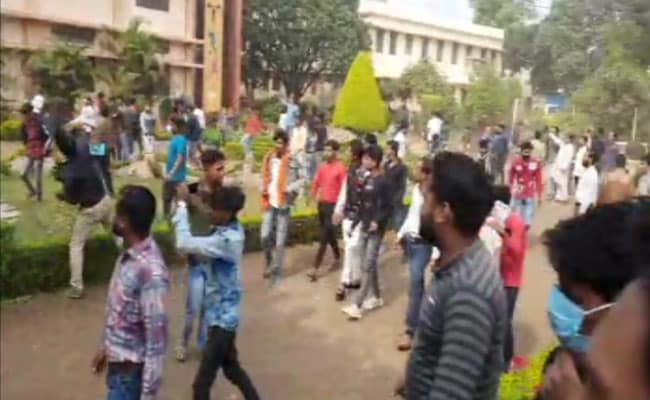 Violence gripped Madhya Pradesh school when workers of the right-wing group Bajrang Dal, along with hundreds of locals, were seen barging into a school in Madhya Pradesh and throwing stones at the building on Monday, claiming religious conversion of students by the Christian Missionary institution, NDTV reported.

The violence took place while the students of Class 12 were sitting for a mathematics exam.

The St Joseph School in Ganj Basoda town of Vidisha district was targeted after allegations on social media that as many as eight students were converted by the administration. Cellphone footage showed a huge crowd outside the building, raising slogans against the school administration. The police were seen trying to disperse the crowd. The students and the school staff present had a narrow escape.

Recounting the panic as the mob threw stones at the glass windows, a student said, “Our concentration was broken, we want the exam to be held again”.

The manager of the school, Brother Antony, has claimed that he received the information of the attack a day earlier through local media, after which he alerted the police and the state administration. He accused the police of not making proper security arrangements.

He also denied the claims of religious conversion, claiming that none of the names mentioned in the complaint matches with any of the students.

The leader of the local Bajrang Dal unit, Nilesh Agrawal, demanded a thorough probe into the alleged religious conversion. “If the school’s involvement is found, it should be bulldozed,” he said.

Security arrangements were made at other missionary schools in the area after the incident.

The police said action will be taken against those responsible for the vandalism. A probe has begun into the alleged religious conversion and the school management will be questioned, said Roshan Rai, the Sub-Divisional magistrate