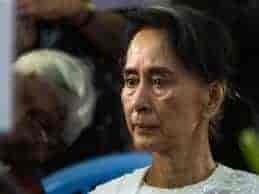 Myanmar: Aung San Suu Kyi, the civilian leader of Myanmar who was ousted in a de facto coup this year, was convicted on two charges Monday and handed a four-year sentence that was quickly cut in half — in proceedings widely criticized as a further effort by the country’s military rulers to roll back the democratic gains of recent years, associated press reported.

The verdict serves to cement a dramatic reversal of fortunes for the Nobel Peace laureate, who spent 15 years under house arrest for resisting the Southeast Asian nation’s generals but then agreed to work alongside them when they promised to usher in democratic rule.

It is only the first in a series of cases brought against the 76-year-old Suu Kyi since her arrest on Feb. 1 — the day the army seized power, claiming massive voting fraud in last year’s election. Suu Kyi’s National League for Democracy party won that vote in a landslide, and independent election observers did not detect any major irregularities.

The verdict was widely criticized abroad as a farce, and it threatens to inflame tensions further in Myanmar, where resistance to the takeover has been fierce and is increasingly armed in the face of a violent crackdown by the military.

Dr. Sasa, spokesperson for the National Unity Government, an opposition group that has declared itself the country’s shadow administration, called the verdict “a shameful day for the rule of law, justice and accountability in Myanmar” and said it represented an effort to “replace our dreams with military dictatorship forever.”

If found guilty of all the charges she faces, Suu Kyi could be sentenced to more than 100 years in prison. She is being held by the military at an unknown location — and state television reported that she would serve her sentence there. That sentence was reduced hours after it was handed down in what the report said was an amnesty ordered by the country’s military leader, Senior Gen. Min Aung Hlaing.

The court earlier offered a 10-month reduction in the sentence for time served, according to a legal official, who relayed the verdict to The Associated Press and who insisted on anonymity for fear of being punished by the authorities. The state TV report did not mention any credit for time served.

The cases against Suu Kyi are widely seen as contrived to discredit her and keep her from running in the next election.

She has been heavily criticized for the gamble she made: showing deference to the military while ignoring and, at times, even defending rights violations — most notably a 2017 crackdown on Rohingya Muslims that rights groups have labeled genocide.

While she has disputed allegations that army personnel killed Rohingya civilians, torched houses and raped women and she remains immensely popular at home, that stance has tarnished her reputation abroad.