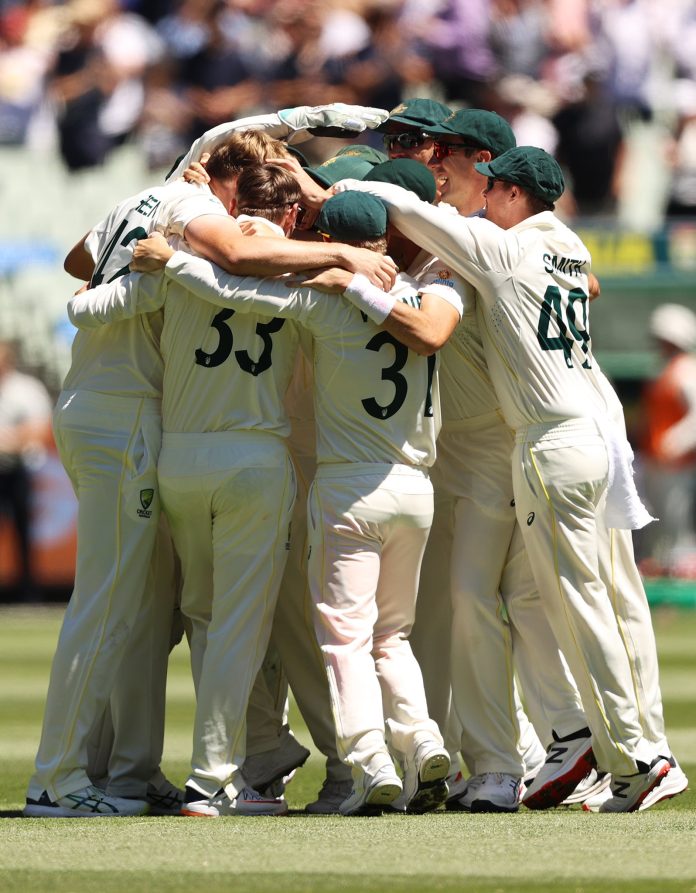 Australia beat England by an innings and 14 runs before lunch on the third day of the third Ashes test at the Melbourne Cricket Ground on Tuesday, AP reported.

The massive victory means Australia retains the Ashes, with a 3-0 lead in the five-match series.

Resuming on Tuesday on 31-4, England was bowled out for 68. Ben Stokes, on 11, was bowled by Mitchell Starc in the fifth over of the day.

The 32-year-old Boland removed Jonny Bairstow for 5 in his first over of the day, then world No. 2-ranked batter Joe Root for 28 in his second over, before dismissing Mark Wood and Ollie Robinson without scoring in his third over.

When James Anderson was bowled by Cameron Green for 2, England’s resistance had lasted just 27.4 overs.

Boland, who claimed match figures of 7-55 and is only the second Indigenous player to represent Australia’s men’s test-cricket side, was awarded the Johnny Mullagh Medal for player of the match. The award honors Australia’s Indigenous team which toured England in 1868.

Australia captain Pat Cummins said his side had been relentless and would now aim for a 5-0 sweep of the series.

“Any Ashes series is when you try to make a mark on your test career, so a chance to start cementing our identity,” Cummins said.

“We have to stay strong and look at the next two games to take something from the tour,” Root said at the post-match ceremony.

Play resumed as scheduled on Tuesday after players from both teams were tested for COVID-19 overnight.

“All results have come back negative,” Cricket Australia said.

The start of Monday’s second day of play was delayed by 30 minutes due to a COVID-19 scare involving two members of England’s support staff.

Australia was bowled out for 267 on Monday as the home side grabbed a first-innings advantage of 82 runs. England could not even reach that figure to make Australia bat a second time.

The fourth test is scheduled to begin on Jan. 5 in Sydney, with the fifth from January 14 in Hobart.