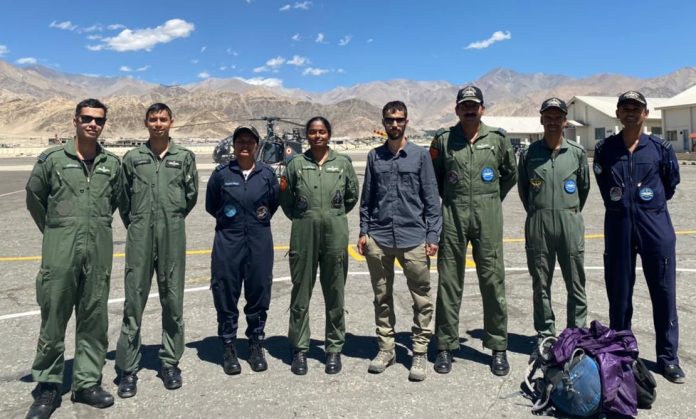 The army on Wednesday said that it rescued an Israeli national from high altitude in Ladakh after receiving a distress call.

In a statement, Srinagar based spokesperson said that today 114 Helicopter Unit received a call for Casevac from Nimaling Camp near Markha Valley.

The statement reads that Atar Kahana, an Israeli national, was suffering from high altitude sickness, including vomiting and low oxygen saturation.

“Leading from the front, Flight Commander114 HU, Wing Commander Ashish Kapoor and Flight Lt Rhythm Mehra as No. 1 and Sqn Ldr Neha Singh and Sqn Ldr Ajinkya Kher as No 2, got airborne within minutes, for this time critical mission,” it reads.

It added that following the shortest route, Casevac aircrafts reached to the spot within 20 minutes of flying time and spotted the casualty on the Gongmaru La pass at an elevation of 16800 feet.

“The No.1 aircrew carried out a thorough recce and landed at the pass with the assistance of No. 2 and picked up the casualty from the pass in the turbulent weather conditions. The casualty was recovered expeditiously within limited time of 1 hour at Air Force Station Leh,” it added. (KNO)