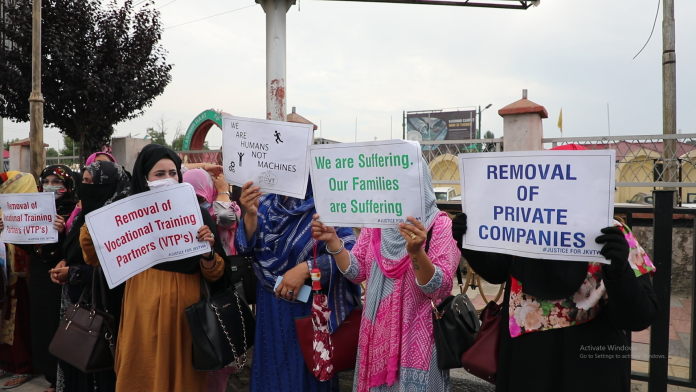 Amid a sit-in protest by the Vocational Trainers (VTs) at Srinagar’s Press Colony, contractual services of nearly twenty of them have been terminated for “unauthorised absence” by Vocational Training Partners (VTPs).

In 2016, the Union Ministry of Education (MoE) approved the introduction of vocational subjects in over 200 government schools to give vocational training to students.

The VTs were hired by the State Education Department in 2016 under a centrally sponsored scheme, National Skill Qualification Framework (NSQF). Nearly 1,100 VTs were recruited as outsourced employees by twelve private companies to teach vocational subjects to the students of secondary and higher secondary classes of the government-run schools in Jammu and Kashmir.

Vocational education was then merged with the erstwhile RMSA scheme, now Samagra Shiksha, for its implementation in schools.

Protesting VTs told The Kashmir Walla around twenty have been terminated in the past week by privately-owned Vocational Training Partners (VTPa).

The protest by the Vocational Trainers has been going on since 1 August pressing the government to constitute a job policy and increase salaries. They also demand the removal of VTPs, the private companies that are meant to provide VTs to schools.

A termination letter to one of the VTs from a private company accessed by The Kashmir Walla reads: “We regret to inform that you have been found to be indulge in activities which are against the employment terms, professional conduct, corporate ethics, and HR policy of our company.”

“Considering the above your contractual services as vocational trainer are hereby discontinued with effect from 5 today i.e 05th August 2022,” the letter reads.

Ghulam Jeelani, President of the Jammu and Kashmir Vocational Trainers Welfare Assocaition, told The Kashmir Walla that the terminations are an attempt to “intimidate the protesting VTs”.

“At the time authorities should have come forwards to talk to us and address our genuine demands, they are terminating us. This is harassment,” he said.

“One of the VT who was on medical leave has been terminated despite being on sanctioned medical leave. Unofficially, we have come to know that his replacement has been made in a day,” Jeelani alleged. The Kashmir Walla could not independently verify this particular allegation.

Geelani said that following the protests by the VTs the companies asked for consent to work on the current payroll that most of them have not filled. The termination letter further highlights that the particular individual “failed to fill the consent form confirming that they were interested in continuing services under the current payroll.”

The private companies have shooted show-cause notices to the candidates who have been “unauthorisedly absent” from their duties.

As per a show-cause notice in possession of The Kashmir Walla dated 8 August 2022, it has been said “you have absented yourself from the school from 1st of August 2022 without applying and getting permission from your Principal to take leave. This is in violation of your contract with us which is reproduced below.”

The notice while highlighting that the act “has caused damage to the brand, damaged the reputation of the Samagra Siksha and us,” asked the employee, “kindly showcause why we should not take action against you and terminate your services with immediate effect. We expect your response by close of 8th August 2022.”

“They are making consent form and show cause notices a base for. That’s illegal,” said Jeelani. “How can we give them consent when we have already been protesting to fullfil our demands?”

VTs accuse private companies of violating the labour laws that guarantee equal wages. They said that they were not provided with “PF (provident fund), maternity leave, insurance cover, equal wages as their other colleagues in the education department and other benefits.”

“Even there is a disparity in the salary of VTs recruited by different private companies. The salary of VTs ranges from 16,000 to 19,800 (rupees),” they said, demanding a resolution to their demands.

On 1 August, the Directorate of Samagra Siksha (J-K) referring to the communication from the Ministry of Education, the Government of India, informed all the Vocational Training partners regarding the enhancement of the monthly salary of VTs from Rs 20,000 to 22,000.

It asked VTPs to release the monthly salary of VTs as per enhanced amount with effect from 1 April 2022.

After VTs didn’t end their protest four days later, the order by the Directorate of Samagra Siksha (J-K) was put into abeyance. “The circular issued vide notice No. Edu/PD/SmS/VE/4644-47 dated 01.08.2022 by Coordinator Vocational education is kept in abeyance till further orders,” the order reads.

However, several candidates currently lie in limbo about their future. “We are highly qualified and after serving the department for seven years, where are we going to go now?” lamented Jeelani.