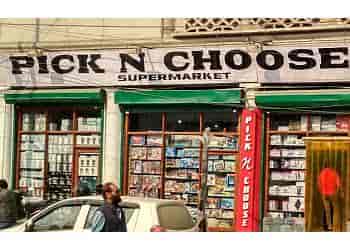 Asima Khan had often heard about fraud being committed by her trusted departmental store but continued shopping from it for about six years.

Recently when she heard about the raid at Pick N choose, a famous departmental store located in Srinagar city’s Lal Chowk by the Legal Metrology department for cheating customers in gross violation of rules laid down by the government, the trust built over the years was broken.

Khan had often noticed new price stickers pasted on the previous ones but had chosen to believe that the prices were correct, said Khan, 30, a resident of Karanagar area of Srinagar. “I used to visit the departmental store all the time to purchase everything required at home,” she said.

When Khan once removed the sticker pasted on a grocery item, she found the previous rate to be lesser than the new one, she said. “There was a ten rupees difference in the price but I thought maybe the company had increased it so I didn’t complain.”

Khan said that she had seen two stickers over different products including food items, personal care products, crockery etcetera. “I had even heard that they change the date of manufacturing and date of expiry on products to finish their stocks,” she said. “Now I don’t trust them. Strict action should be taken against them.”

Khan is among the few customers The Kashmir Walla spoke with in order to know their experiences. All the customers said that they had faced similar experiences.

An official at the Legal Metrology Department in a statement said that the department had found that Maximum Retail Price (MRP) was increased on the products by pasting the new stickers on them.

The team led by the Deputy Controller Muzaffar Wani had seized all the goods with fabricated stickers.

As per rules set by the Legal Metrology Act, whoever does not conform to the declarations on the package as provided in this Act, shall be punished with fine that may extend to one lakh rupees or with imprisonment for a term which may extend to one year or with both.

Wani had also added that Pick N Choose is “a habitual offender of cheating and in the past as well this departmental store was warned of legal action if it doesn’t stop pasting fabricated printed stickers on products.”

Earlier, the department had seized products from the store in 2018 and later in December 2020. “We won’t allow Pick N Choose to carry business in an unlawful manner. Besides we have sufficient proof and documents against it,” he said while appealing to the customers to know their rights.

The incharge of the departmental store while speaking to The Kashmir Walla said that there was a sudden raid by the Legal Metrology department regarding products which come with varied prices based on the country where they are imported from, leading to confusion amongst customers.

“If you check the shelves at the store, there are two products of Coca Cola, one of them is imported and the other one is India. The MRP of Indian Coca Cola is worth 25 rupees and imported one costs 85 rupees,” said the incharge of the store. “Someone might have complained based on confusion.”

The store is waiting for the response from the Legal Metrology Department and the further course of action will depend on that, he said. “The store is open. You can come and check for yourself.”

Some names are changed on request.

Previous articleWatch | Without statehood, elected J-K govt will be weak: Nasir Sogami
Next articleSecurity tightened as forces observe movement of ‘infiltrators’ along LoC in Rajouri