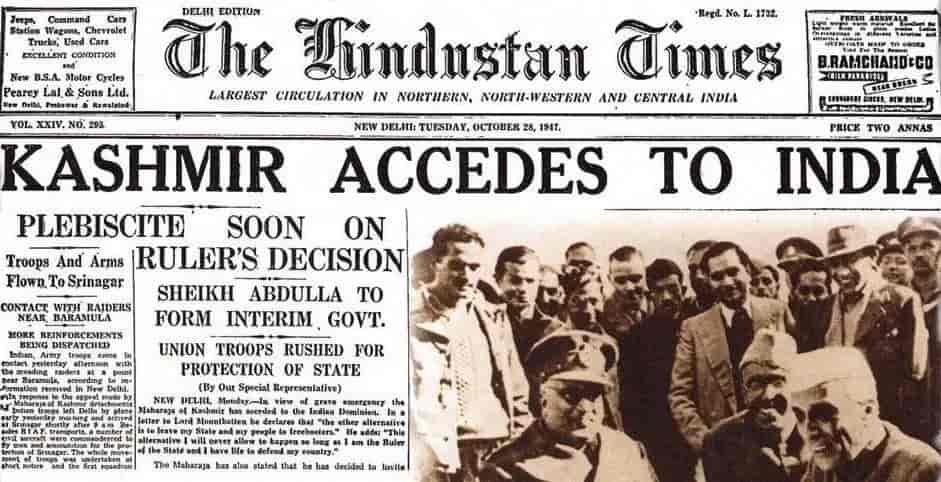 A two-day symposium on the tribal invasion of 1947 was held on its anniversary this year, on 22 October, at the Sher-i-Kashmir International Convention Centre in Srinagar. On exhibition were several treaties on Jammu and Kashmir, including the Instrument of Accession, one of the most contested documents on Kashmir.

There were also newspaper clippings from 1947. One of the clippings was purported to be of a report by the Hindustan Times newspaper dated 28 October 1947, two days after the Dogra ruler Hari Singh had fled from Kashmir and signed the Instrument of Accession and a day after Indian troops had landed in Srinagar.

“Kashmir Accedes to India,” the headline of the purported news report read. The organisers, the Indian National Museum Institute of History of Art, Conservation and Museology, however, blurred a subheading that read: “Plebiscite Soon On Ruler’s Decision”. The unverified clipping has been in wide circulation online since long.

“We have decided to remind our new generations how this land,” New Delhi’s appointed Lieutenant Governor for Jammu and Kashmir, Manoj Sinha said during the event, “was trampled and bloodied by Pakistan, its army and government on October 22.”

The government, Mr. Sinha said, would “make both the elderly and the younger generation aware that Pakistan did not only shed the blood of the people and Kashmiriyat, it tried to divide us, which we have failed with our unity and goodwill.” He termed this day in 1947 as “black day”.

According to Doordarshan, India’s public broadcaster: “The two-day National Symposium on 22 & 23 Oct 2020 and the Exhibition commencing on 22 Oct 2020 is an attempt to deliberate upon the records and history of this deceitful attack and subsequent victory of India.”

It added: “The National Symposium and Exhibition on the ‘Memories of 22 Oct 1947’ will outline shapes and contours of a future museum on the historical theme.” The Ministry of Culture in New Delhi has also digitised the exhibit under a website of the same name.

The symposium to create a fresh 1947 narrative was not an isolated event. Elsewhere in Srinagar hoardings denouncing the tribal raid. A small group of demonstrators, led by the newly formed Jammu and Kashmir Workers Party president Junaid Mir, marched through Srinagar’s secure areas, shouting slogans against Pakistan.

The marchers, including Mr. Mir, adapted the ages-old ways of protest of the Hurriyat—not just rewriting popular pro-freedom slogans but also presenting a memorandum on Pakistan’s “war crimes” to the United Nations Military Observer Group in Srinagar (UNMOGIP). “If the UN has an organ here, we asked them why you don’t interfere,” said Mr. Mir. “The problem is, it is them [Pakistan] who have terrorised the common man [in Kashmir]. Why is no attention being given to that?”

“It was one of the biggest news since 1947,” Mr. Mir said of the demonstration as he lamented the lack of coverage by the Kashmiri press. “Nobody has ever done it [commemorating the tribal invasion and protesting against Pakistan] before.”

It was, indeed, a rare expression in Kashmir, of anger against and contempt towards Pakistan; on an issue that had drowned in the discourse of the more immediate concerns on human rights violations by the government forces in recent decades of renewed turmoil. “It was a solitary walk in remembrance of those killed, butchered, massacred, molested by Pakistani tribal men on 22 October 1947,” said Mr. Mir.

The significance of the 22 October 1947, said Mr. Mir, was that Pakistan – that he emphasised as “terrorism factory of globe” today – sent tribal fighters to plunder Kashmir and massacre Kashmiris. “This is what we are trying to tell the people, that if that Pakistan had not done that we would have been in peace,” he asserted. “This is the day India saved us”.

Ironically, the key figures to the events of October 1947 are also at odds with the broader Hindutva political outlook. With the Dogra ruler abdicating his authority, Sheikh Abdullah’s National Conference organised the people’s militia to resist the tribal fighters; today, he is demonised by the Hindutva narrative, bracketed as an anti-national whose legacy it intends to eradicate.

Simultaneously, one of the people’s militia members, Maqbool Sherwani stalled the tribal raiders in Baramulla as the Indian Army was yet to land in Srinagar. A communist who stood for communal amity, Mr. Sherwani — long forgotten by the Indian establishment except for a section of the Army in north Kashmir’s Baramulla, where a hall is named after him — is now being placed on the centre stage by the Hindu nationalists.

New Delhi’s new push is aimed at presenting Pakistan as the initiator of Kashmir’s more than seven decades of misery and suffering. Instrumental to the new narrative is the cherry picking of history — playing up certain facts but also blacking, or blurring, out certain other facts.

For Kashmiris, the week between 22 and 27 October represents the beginning of its entrapment in the fight between India and Pakistan, with Kashmiris being the casualty. The narrative of the tribal invasion is also representative of the divide between the opinion in Kashmir and India, with the Kashmiris observing 27 October as “black day” instead, for the same reasons that have today led to a continued hostility towards New Delhi.

“Indian army’s first cordon & search operation in Kashmir was carried out immediately upon their arrival in Kashmir on 27th October 1947 at Gogo just outside Srinagar airport. 10 civilians were killed after being lined up by the arriving troops,” tweeted noted rights activist, Khurram Parvez.

In an interview to the journalist and author Andrew Whitehead, who has extensively reported on and documented the history of Kashmir, Sardar Abdul Qayyum Khan, who was among those who had organised a raiding party, however, said that the invasion on the whole was unplanned and that many of these tribesmen had “moved in on their own”.

“These tribes were a loose kind of thing, mostly anti-Pakistan element,” he told Mr. Whitehead in the April 2001 interview, also admitting that the tribals had committed transgressions against Kashmiris as “It shouldn’t have happened but it was unavoidable”. Mr. Khan, however, absolved Pakistan of the blame.

“Look at Pakistan on 1947… at that time there was no army, no finances. The armament which came to the share of Pakistan was strewn literally from madras to Calcutta. If you had the barrel or the knife in one place, you had the bolt lying somewhere and the butt lying somewhere else,” he told Mr. Whitehead. “Same for the troops – a section here, a section there. It took one year for the Government of Pakistan to reassemble the troops and the armament and the finances.”

“We were in distress,” he further stated. “There was no Pakistan Army as such [and the] Government of Pakistan was in disarray. Anybody coming to our help we would have welcomed and encouraged.” Mr. Khan, however, added that: “As soon as we came to know what they [the tribals] were doing, we started pulling them back.”

“If the Masoods and the others [tribes] had not stopped at Baramulla to loot but had gone straight for the airstrip [in Srinagar], Pakistan might have Kashmir today?”, Mr. Whitehead asked Mr. Khan during the interview, who responded with an affirmative: “Yes. That is true.”

In 2020, the alternate narrative is being pushed forcefully. On the ground, the Bharatiya Janata Party also organized rallies in J-K on 26 October — commemorated as Accession Day. In Srinagar vehicles of the BJP escorted by a greater number of security vehicles paraded the Indian national flag through the streets of Srinagar, albeit limited to heavily fortified areas.

In Jammu, the BJP’s spokesperson, Abhijeet Singh Jasrotia, did not hold back in expressing the party’s intent. “We are in the process of forming a Rajput youth brigade,” Mr. Jasrrotia was quoted by The Tribune, “which will settle in Kashmir to carry forward the nationalist agenda and honour the sacrifices of the brave Rajput Dogra warriors who guarded and extended the boundaries of J&K.”

At the same time, a little over a year after the abrogation of J-K’s semi-autonomy, on 26 October 2020, New Delhi imposed new laws, revoking the limitations on purchase of land, to allow any Indian citizen to buy land in the region.