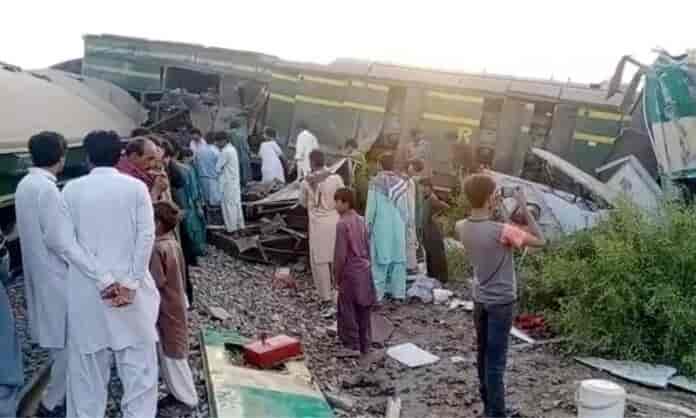 At least 40 people were killed while approximately 100 others were injured on Monday after two passenger trains collided near Pakistani city of Daharki, a city in Ghotki district of upper Sindh, according to officials.

According to a spokesperson for Pakistan Railways (PR), the accident took place around 03:30am after a Millat Express train — headed from Karachi to Sargodha — derailed and fell across the “down track”.

Due to this, it collided with a Sir Syed Express train coming from Rawalpindi, he said, adding that the incident took place near the Raiti railway station, Dawn reported.

“The Millat Express train left Daharki station at 03:28am. Information was received at 03:43am that the train had derailed at 03:38am. Meanwhile, the Sir Syed Express train passed through Raiti at 03:38am. As the coaches of the derailed train were infringing the down track, the driver tried to apply emergency brakes but the locomotive hit the infringing coaches at 03:38am,” a PR statement said.

The PR spokesperson said a relief train had been dispatched from Rohri while officials, along with police and the local administration, were carrying out rescue efforts. He said that helpline centres have been set up for passengers in Karachi, Sukkur, Faisalabad and Rawalpindi.

He further said that some of the passengers from the Sir Syed Express train have been taken to the Sadiqabad railway station. “Railway traffic would be restored when tracks are cleared,” he added.

Ghotki SSP Umar Tufail confirmed that 40 people had died in the incident. “Thirty eight bodies have been shifted to hospitals and two bodies are being retrieved,” he was quoted as saying by Dawn newspaper..

He said that a list is being compiled of the deceased, adding that 25 injured were in critical condition.

In a statement, the Pakistan Railways Directorate said 32 people had died and more than 80 were injured, that a relief train from Sukkur had reached the site. “Pakistan Army troops, police, the district administration and rescue workers took part in the rescue operation,” the statement said.

The process of shifting the injured and the deceased to hospitals has been completed, it said, adding that giving medical attention to the injured was of the utmost priority.

As a major step towards the empowerment of women in the UT, the Administrative Council (AC) which met under...
South Asia