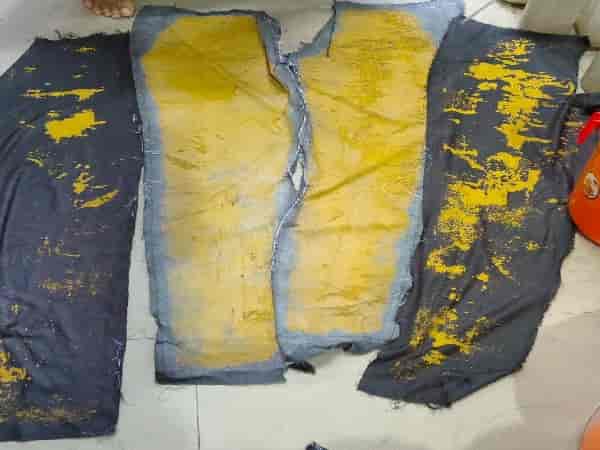 Authorities at a Kerala airport today seized 302 grams of gold from a passenger who had hidden it in a paste form – between the layers of the pair of pants he was wearing.

The Air Intelligence Unit and the Customs department at the Kannur airport seized gold worth Rs 14 lakh.

According to a tweet by ANI, contrary to the usual jewellery or biscuit forms that the precious metal is smuggled in, this time around, it was in paste form and the image shared by the news agency features the double-layered pants in question that has been cut up to reveal the said gold paste.

The image shows the stark-yellow, gold paste spread all along the length of the pants. Along with the image, ANI quoted the Customs Preventive Unit in Kochi as saying, “Air Intelligence Unit at Kannur airport has seized 302 grams of gold in the form of a very thin paste, concealed within the double-layered pants worn by a passenger.”

Social media users were taken aback by the sheer ingenuity showcased by the alleged smuggler in the case. “What a technique!” said one shocked user.

“When I grow up I want to be a customs officer in Kerala,” joked another user.

“Like the whole pant won’t go off when they pass the metal detector. Gold is a metal, passing through any metal detector in any form will make it go off!” one user said, arguing the logic behind such a move.

Such bizarre gold smuggling techniques are not new to the country. Recently, in Amritsar, a man who had arrived from Sharjah was arrested at the airport for allegedly trying to smuggle in 1,894 grams of gold paste by hiding it in his underwear.

During the search, officials found 1,894 grams of gold in the form of a paste in his underwear. On extraction, 1,600 grams of gold worth ₹ 78 lakh was recovered, a statement by the Customs department had revealed.

Previous articleTeachers should be prioritised for Covid jabs: WHO, Unicef
Next article“Briefed about army’s targetting of OGW network”: MoS defence visits Kashmir