3 arrested for assaulting Muslim man in UP, rightwing mob demands their release 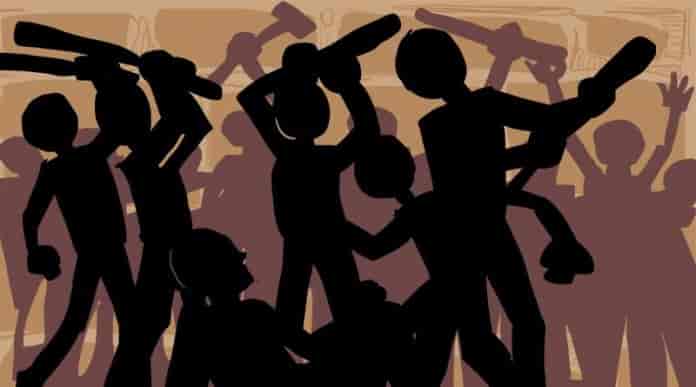 Three people have been arrested for parading a 45-year-old Muslim man in Uttar Pradesh’s Kanpur town through a street; assaulting him and making him chant “Jai Shri Ram” slogans on Wednesday. He was eventually handed over to the police.

A man in Kanpur was beaten up on a road in public view by a mob reportedly belonging to Bajrang Dal over allegations of forced religious conversion. According to reports, the victim (45) was allegedly made to chant ‘Jai Shri Ram’ by the mob.

The Uttar Pradesh police have arrested three persons in Kanpur for assaulting a Muslim man and forcing him to chant “Jai Shri Ram” while parading him through the street on Wednesday.

The 45-year-old man, an e-rickshaw driver, was beaten up by a mob reportedly belonging to right-wing group Bajrang Dal over allegations of forced religious conversion, India TV reported.

The incident, which took place in Varun Vihar area of Kanpur, came to light when a video clip went viral showing the victim’s minor daughter crying and pleading with the mob to spare her father. The man was later handed over to the police.

“Rahul, Aman and Rajesh have been arrested after the incident and further investigation is underway,” said Kanpur police said in a statement.

“We have seen the video of a man being assaulted. Based on a complaint by the victim, we have filed an FIR and we are carrying out the legal process,” the police said.

The incident took place 500 metres from an intersection where Bajrang Dal held a meeting, where they claimed Muslims in the area were trying to convert a Hindu girl in their locality, NDTV reported. The assault reportedly took place just after the meeting.

After the arrest, a mob of Bajrang Dal workers held a protest outside the concerned police station in Kanpur and left only after “assurances” from the police about a fair investigation. The mob however said they would return if those arrested were not released soon.

In a statement, the Kanpur police said they have filed a case of rioting against a local who runs a marriage band, his son and around 10 unknown people, based on a complaint by the assaulted man.

The police have not said if the men named in the case are affiliated to Bajrang Dal.

The Muslim man has not spoken to the media so far. However, in his complaint, he said, “I was driving my e-rickshaw around 3 pm when the accused started abusing and assaulting me and threatening to kill me and my family. I got saved because of the police.”

The man is a relative of a Muslim family in the locality that is involved in a legal dispute with their Hindu neighbours.

According to the police statement, the two families filed cases against each other at the local police station in July.

The Muslim side had filed an FIR of assault and criminal intimidation first. The Hindu side then filed a case alleging “assault with the intent to outrage the modesty of a woman”.

NDTV quoted sources as saying that the Bajrang Dal recently got involved in the matter and had been making allegations of forcible conversion against the Muslim family.

The assault in Kanpur came just days after inflammatory slogans threatening to kill Muslims were shouted at a rally in Delhi’s Jantar Mantar. Some people who attended the rally also assaulted a journalist and asked him to chant “Jai Shri Ram”.

Police arrested former Delhi BJP spokesperson and Supreme Court lawyer Ashwini Upadhyay and five other people in connection with the communal sloganeering. However, Upadhyay was granted bail the next day. He has claimed the Delhi police framed him.