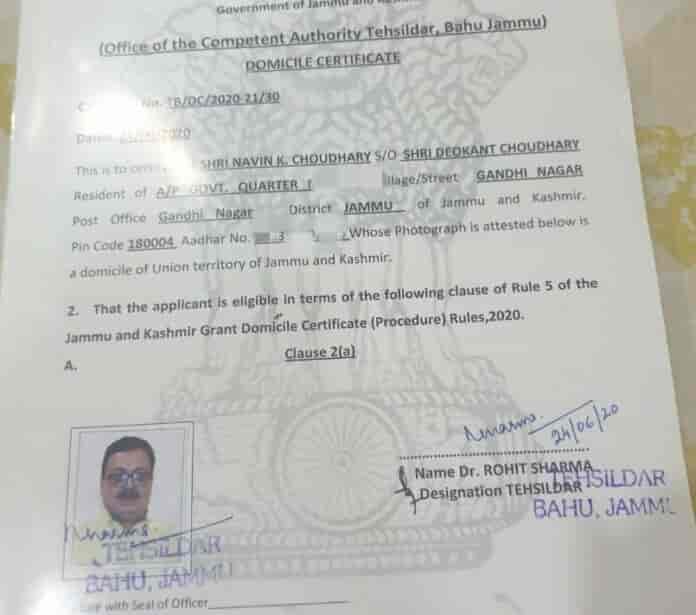 A senior Jammu and Kashmir cadre Indian Administrative Service officer from Bihar, is among the nearly 25,000 people who have been granted a domicile certificate—which allows people non-locals to get a residency certificate for education, employment and buying land—in the erstwhile state, The Tribune reported.

Navin Kumar Choudhary, became the first IAS officer who has been granted the domicile certificate to be the resident of J&K.

“This is to certify, Shri Navin K Choudhary son of Shri Deokant Choudhary resident of at present Gandhi Nagar Jammu is a domicile of UT of J&K,” reads the domicile certificate issued by Tehsildar Bahu, Rohit Sharma.

“That the applicant is eligible in terms of the following clause of Rule 5 of the Jammu and Kashmir Grant Domicile Certificate (Production) Rules, 2020,” reads certificate issued by the Government which has photograph, Aadhar Card of Mr. Choudhary.

According to J&K Grant Domicile Certificate (Production) Rules, all those who have been living in Jammu and Kashmir for more than 15 years can apply for the certificate.

The newspaper report while citing official records reveals that Government has received 33,157 applications for domicile certificates in J&K and over 25,000 people have been granted the citizenship certificate.

Srinagar is the only district which has received 65 applications for domicile certificates but not a single one has been issued as of now, reveal government documents.