Table salt is scattered on the floor, along with broken fragments of a water pipe, a firepot, a wall clock, and utensils in the single-storey house.

“They took the salt from the kitchen, and rubbed it in our eyes,” says 50-year-old Atiqa Bano as she sifts through the rubble inside her house in Nasrullah Pora. The village in Budgam district of central Kashmir has a population of roughly 15,000. Right now, however, it is mostly deserted.

Ms. Bano has also returned only briefly to assess the damage. Since last Friday, she has been spending the night under the open sky in the farms behind the village along with a few other villagers. Even when the rains drenched her and the others on Saturday night, they did not dare to return home in the dark.

That’s how it has been since personnel of Jammu and Kashmir Police and Central Reserve Police Force (CRPF) raided her village on Friday afternoon, after Fayaz Hussain, a deputy superintendent of police, was injured during a fight with the residents at the local mosque at about 2 pm.

As they saw armored vehicles entering the village an hour later, most of the men, including Ms. Bano’s husband and three sons, fled fearing detention. So when the troops came back for another raid around 11 pm that night, only her 25-year-old daughter was home with her.

The staircase of their house has been dismantled, and is lying in the front yard. Ms. Bano says the forces tore it from the wall to prevent them from escaping to the attic. “The men stormed in from the front gate, over the boundary walls, from every direction,” she says. To stop the women from screaming, “they shoved the barrel of their guns in our mouths.”

They ransacked through Ms. Bano’s belongings, and looted her gold jewellery, two power inverters, and their rice stock, she says.

While Ms. Bano was gagged, she says, her daughter was beaten up with the butt of a gun, injuring her right arm badly. Ms. Bano ran to the fields after the forces had left, and people there took her daughter to a hospital.

In the raid, the police detained seven men, whom “they kept tied to a tree, and took away in the evening,” says Ghulam Rasool Dar, an 80-year-old resident of the village. Among the detainees is Ms. Bano’s octogenarian father, Abdul Gaffar Dar.

On Friday, in what is a common violation of the COVID-19 lockdown guidelines in the Valley’s countryside, “about 150 men had gathered to offer prayers” in the mosque, says Ghulam Rasool Dar. In the previous week too, the police had interrupted a Friday prayer at another mosque in the village.

Mr. Hussain, the police official, entered the mosque with his escorts to stop the service. “The people who were present there say he did not take his shoes off before coming in [the mosque],” which enraged the worshippers, says Ghulam Mohammad Dar, the village sarpanch, associated with Bharatiya Janata Party (BJP).

In the quarrel that ensued, a few villagers told me that the official threatened to shoot at them while one of his subordinates locked the mosque door from outside. The residents began throwing stones at the police. Amidst the clashes, Mr. Hussain’s team escaped, but he was stranded behind.

He suffered a head injury in the clash, and later had to get stitches. “But some of us had only saved him and handed him back to the police,” says Ghulam Rasool Dar.

A few minutes later, hundreds of personnel rushed into the village for the beginning of multiple mass raids that are still ongoing.

Most houses in the village have been deserted; a few of them are locked while occupants of other houses have left the front door open as they fled hurriedly. Their belongings lie scattered inside. The vegetables still seem fresh in those kitchens and refrigerators that have not been vandalised.

When the troops raided their neighbours on Friday night, “my father and I locked our door, and hid in the attic,” says 12-year-old Muntazir Ahmad Mir. “The forces kept saying, ‘Saalo, baahar niklo!’”

Several residents were caught off guard in the initial raids, including Shafeeqa Bano. The 31-year-old kept her home locked as the troops vandalised the windows and doors. But when three policemen entered the front yard, and walked towards the Maruti Suzuki Alto 800, which the family had recently brought—she ran outside.

“I got in their way, begging them to leave it, which is when they beat me with their guns,” she says. Her legs have turned purple as bruised, and the car’s glass panes have been shattered.

Senior Superintendent of Police (SSP), Budgam, Amod Nagpure, denied allegations of vandalism, saying, “The police don’t do that. People were trying to impose hartal after the death of a militant commander [Riyaz Naikoo] and they vandalised the shops of the people who were against it. There has been an internal rift because of that and we’ve also registered a case and the investigation is going on.”

Mr. Nagpure adds that the police has identified at least fifty people in the case and lodged four First Information Reports, under the charges of arson and attempt to murder.

The village is littered with shattered glass from window panes and car windshields. Less than two hundred residents hang around during the day, the sarpanch says, and the village is nearly completely deserted at night.

More than a dozen villagers that I spoke to said the forces either looted or destroyed their valuable possessions—including cash, electronic appliances, furniture, bugnis or traditional earthen piggy banks, cooking gas cylinders, and jewellery—during the raids.

They also say that the troops vandalised local shops. One of them belongs to Mudasir Ahmad Dar, situated on the village’s main road. “The forces looted our stock, and loaded it on a truck that they had brought with them,” he says, standing in his ransacked shop. The blackened body of his refrigerator, which was set on fire, lies out front.

He has lost 15,000 rupees from the cash desk as well as his garment and shoe stock, he says.

“The forces had themselves brought two fire tenders with them,” he adds. “They gave the firefighters two boxes of bananas and a box of oranges that they had taken from our shops.”

After becoming the sarpanch in 2019, GM Dar had hoped to win over more support for the BJP, a party he had joined twenty years ago. He won unopposed in his village, albeit with an abysmal voter turnout that is quite typical in the Valley.

The grassroot leaders, who engage in electoral politics in Kashmir, especially those in the villages, are risking their personal safety: the militants have on numerous occasions attacked elected officials for acting as collaborators with the Indian state.

“I stay under government protection at a hotel in Srinagar,” he says. “I came back during the pandemic because it is safer here. We have had no cases in our village.”

In the Friday raid, however, the forces did not discriminate between his house and his neighbours’. He says he saw them break the glass on the windows of his house and car, as he sat inside the house with his child.

“We risk everything to ensure Indian democracy survives in villages. I support the indictment of those who attacked the police,” he says. “But had I known this would happen, I would never have stood for election.”

Continuous raids and living in fear

Atiqa Bano was showing me around her father’s house when the convoy of armoured vehicles descended onto the village again. Adults and children ran alike to the farms behind the village. I stayed put inside her father’s deserted house as the troops ambled out of the vehicles and into the other empty houses in the neighbourhood.

From the fields, villagers could faintly hear the announcement that the police were making on loudspeakers: a long list of residents, most of them young men with past arrest records for stone throwing, who must turn themselves over at the station immediately.

Mr. Nagpure, the SSP, says the announcements are part of a routine procedure, “so that people come and present themselves in front of the investigating officer.”

Javed Dar, a 20-year-old resident, also figured on that list. All he could trace this hunt back to was his a-month-and-a-half long imprisonment during the uprising of 2016 after the government forces killed a militant commander, Burhan Wani.

He now sat in the field with his father, who complained about not being able to continue fasting during Ramzan as they had no way to prepare sehri. Unlike his father, however, Javed Dar had not been fasting anyway, and says he was not present at the mosque when the police official was attacked.

“They are forcing us towards militancy,” he said. The men around him nodded in agreement.

Before ransacking, the police used a chemical spray that caused them to faint, claim multiple women. When the forces picked Ms. Bano’s father up, he was at his home with her sisters, who fainted after being sprayed with this chemical, she says.

“I will still survive,” she says. “But my father is very sick. He was not even wearing proper clothes when they took him away.”

Ms. Bano also does not know where her daughter or the rest of the family presently is; she lost her phone in the Friday night raid. “Where will I go?” she wails. “I have become a musafir.” 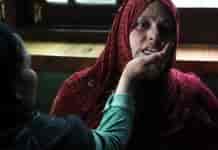