Will persuade son to return if police shares location with us: Family of Srinagar youth 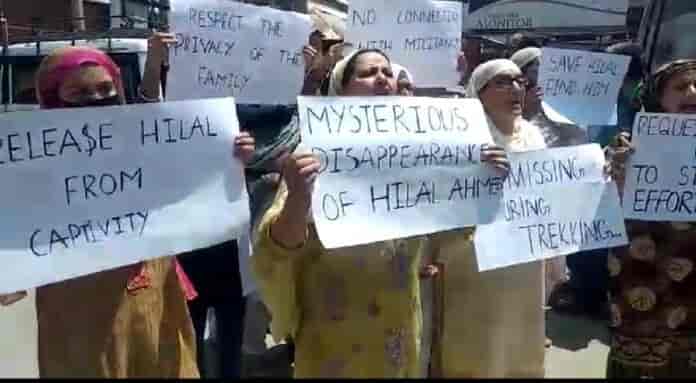 Srinagar:  A day after police claimed that the missing youth from Bemina area of Srinagar has joined militant ranks, the family and relatives of the youth on Wednesday staged a protest at Srinagar’s Press Enclave while rejecting the police claims.

The family and relatives of Hilal Ahmad Dar, who as per Inspector General of Police (IGP) Kashmir Zone, Vijay Kumar has joined Hizb-ul-Mujahideen, assembled at Srinagar’s Press Colony, holding placards.

The family said that they are not ready to accept the police claims as their beloved son was not inclined towards militancy. “We are not on the streets to fight with anyone. But we want him to return home,” a family member told a local news gathering agency—Kashmir News Observer (KNO)

He said that if police claims are true then they should share his location with the family and “we will persuade him to return home.”

Pertinently, Mr.Dar went missing a week ago while he along with his friends were on a trek to Gangabal lake in Ganderbal. His five other friends returned home on the same day, however, he didn’t return home and has been missing since then.

After a week, the Kashmir police chief yesterday stated that the youth from Bemina has joined Hizb-ul-Mujahideen, a militant outfit—(KNO)